While the European top players were in Kazan for the 2018 Men and Women’s Team Championships, the upcoming stars were in Oviedo for the IBERDROLA Spanish Junior Open 2018. It was a very successful tournament with players from all over the world, but was definitely most successful for France.

The one who enjoyed the tournament the most, must have been the Frenchman Fabien Delrue. While France was represented in each final, he was responsible for the two out of three titles France took home.

Most eyes were on to the clash between Christo Popov and Arnaud Merkle in the men’s singles final , who are without doubt talented young men. However Delrue showed that France is also in the possession of a talented doubles player, that is him.

‘The tournament went well for me, because I won two gold medals. That is a first time for me!’ Delrue stated to Badminton Europe. ‘I am satisfied with myself because I was able to focus on me and the game’ Delrue commented after his matches.

Doubles is played with two players and perfect results do not come overnight. That is why the French coach is testing some new pairs with his junior players. The test at the Spanish Junior passed for Delrue: ‘The cohesion with my partners was really good! We tried to speak a lot between each points to be ready for the next one and stayed focus on the tactics’

Delrue will also play the Dutch and German junior with William Villeger. With Julliete Moinard he will play Swiss Open, starting today and also the Dutch Junior.
‘It is difficult but it is a good chance to play against the best players of the world’ Delrue is looking forward to Swiss Open. In men’s doubles he will play with his usual partner Maxime Briot.

After all these tournaments, it should be clear with who Delrue definitely will play on the European and World Junior Championships. It is after all what Delrue is ultimately preparing for in his last junior year.

Read: Jan Jorgensen: Hopefully I can get a lot of matches 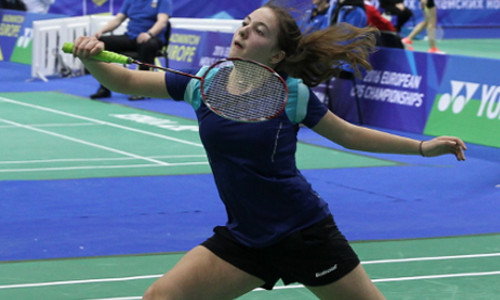 Also Romanian pair Maria Alexendra Dutu (pictured above) and Ioana Grecea (pictured below, both photos by Mark Phelan) are preparing for the European Junior Championships! As number one seeded for the tournament, they were definitely the favourites, but fulfilling the expectation is different.
‘We could say we were a little lucky too as Ioana hit the net and won the last point’ Dutu commented after their final.

That last point might be lucky, their way until the title was definitely not.
‘We were happy that from the very first matches we managed to stay focused on the game and quickly identify out opponents weaknesses and adapt our playing strategy’ Dutu and Grecea stated. ‘We next planned on improving our technique in order to become stronger.’

‘In the semi- final we played against a Spanish pair which proved to be more challenging but we managed to adapt quickly, smash more and play faster. We were very motivated to win the final which kept us calm and focused on keeping the shuttle on the court and playing as technical as possible’ Dutu and Grecea said about their final matches.
‘Our next goal is to win a medal at the European Junior Championships.’ 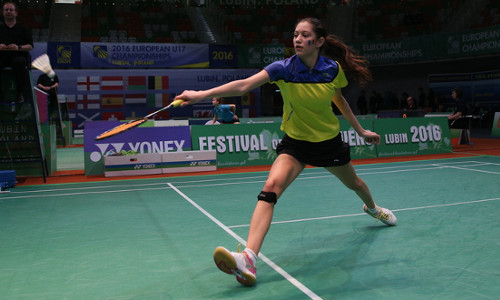 An overview of the finals:

Find all the results of the IBERDROLA Spanish Junior Open 2018 here.