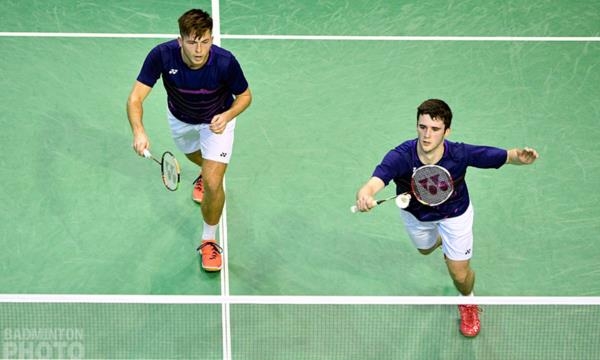 Iceland International has been a very successful tournament for young players who just entered the senior circuit. Young Scottish pair Alexander Dunn and Adam Hall were one of these players as they claimed their third senior title together.

In the final they faced Danish pair Nicklas Mathiasen and Mikkel Stoffersen. What seemed like a solid win in 21-16 21-18 in scores, was not the case in reality: ‘We were pushed hard in the finals and quarter finals’ Adam Hall commented to Badminton Europe after their match.

After two previous victories in Ireland and Turkey, Dunn and Hall were first seeded in Iceland. ‘We came in as first seeded, so we knew we were slight favorites to win the title’ Hall stated. Despite this expectation, Dunn and Hall are really happy with their win today.
‘We’re just really pleased to come through for the win

Dunn and Hall have greater plans for this year after this tournament win. ‘We are hoping to be selected at the Commonwealth Games in Gold Coast this April’ Hall mentions to Badminton Europe.

‘Then we are hoping to start challenging for titles at some higher ranking tournaments before hopefully playing our first European and world championships together!’

First title for Macpherson and O’Donnell, fourth for Parsons

Scotland was also successful in women’s doubles. The young pair Julie Macpherson and Eleanor O’Donnell won their first title in their first senior year. In an exciting final of three games, they overcame Emilie Furboand Trine Villadsen from Denmark.

Sam Parsons (England) has been off junior for a longer period and already won his fourth title in men’s singles. In a match with long rallies and crazy shots, he was clearly the better one of Bodhit Joshi.

Unfortunately the Danes were not in good luck today as first seeded pair Kristoffer Knudsen/Isabella Nielsen also lost the mixed doubles final. After three long games, they faced their defeat against Rohan Kapoor/Kuhoo Garg from India.

Read: Ticket sale is on

Find all the matches and results of Iceland International 2018 here