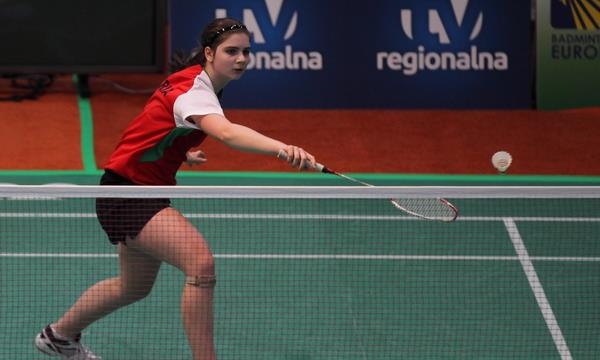 Bulgarian Junior player, Maria Delcheva has had a successful September. During the three recent BEC (Badminton Europe) Junior Circuit tournaments, she has won a total of 3 titles out of 4 possible.

Delcheva, 17, participated in Lithuanian Junior (8-10 September) and Ukraine Junior (13-16 September), in both women’s singles and women’s doubles, which resulted in three titles wins.

The Bulgarian junior player took back-to-back victories in both Lithuania and Ukraine, including the women’s doubles title in the last mentioned with partner Hristomira Popovska.

— To win two tournaments in a row in a time period of two weeks was a big challenge for me but I managed to do it and I am really happy with it, Delcheva tells Badminton Europe.

New focus
— I felt really happy about winning in Ukaine and Lithuania but this is only the beginning, she explains.

— I have already forgotten them and am now focusing on the World Junior Championships and the next tournaments ahead.

The goal for the ambitious Bulgarian is to qualify for the Youth Olympic Games in 2018.

Several repeaters
Delcheva was not the only player who took more than one title at a single tournament. In Lithuania, Georgii Karpov from Russia did not settle with the men’s singles title, but won the men’s doubles event with Mikhail Lavrikov against Karl Kert and Marcus Lõo from Estonia; 21-18, 21-11.

Lavrikov even beat his doubles partner in the mixed doubles final with Anastasiia Shapovalova; 18-21, 21-13, 24-22. And Shapovalova completed the tendency of ‘double wins’ in Lithuania as she won the women’s doubles with Anastasia Osiyanenko.

Belgian Junior from 22-24 September, was the only of the three recent tournaments that saw different winners in all events.