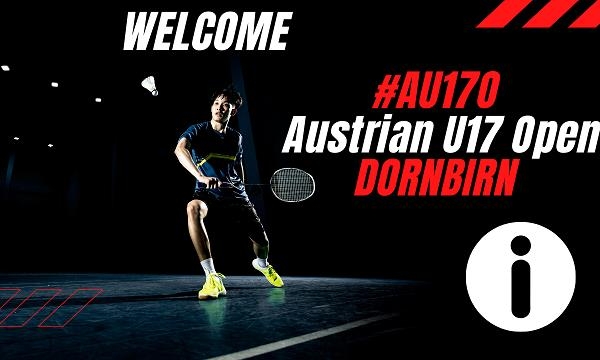 This year the Austrian U17 Open in Dornbirn — which is offering 1,010 euros in prizes- has more than 200 registered players. The tournament will be played from 4 to 6 June 2021.

Due to the pandemic, there will be 48 men and women competing singles, 24 players in doubles, and 48 in mixed doubles. Unfortunately, many players have remained on the reserve list due to restrictions.

The tournament organization appreciates your understanding. For the first time, there will be a TV production this year and the European Badminton Community will be able to enjoy the atmosphere on the court. TV-Court 1 will broadcast live every day, inside and outside the court – Interviews, etc.

Today it is just a pilot project. However, Austrian U17 Open could be the first youth tournament to be broadcast on Badminton Europe TV in a near future. We are especially excited that the top European U-17 players are coming together at Dornbirn.

We regret that the Danish national team is not represented this year. They were already registered for the Croatian U19, but this tournament was cancelled.

Europe’s # 2 Daniel FRANCO from Spain, # 4 Mark KOROSA (Slovenia) and # 7 Arthur WAKHEVITSCH (France), followed by Austria’s best player # 9 Ilija NICOLUSSI will all be competing on the court.

Top female players include # 7 Cristina TERUEL (Spain) and # 9 Floriane NURIT (France). The Peruvian players Rafaela and Fernanda MUNAR SOLIMANO will get a place in the main draw to play single after they won the U17 Spanish Open and the U17 Spain International.

However, they will not receive ranking points according to the regulations.

In women’s doubles, four seeded pairs from France have a top-ranking position.