Ukrainian Badminton Federation is looking for a Head Coach 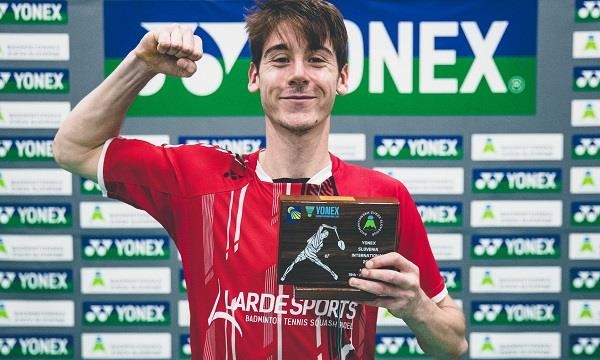 After a two-year wait, Arnaud Merkle picked up his third title at the Slovenia International in Maribor. The young Frenchman stood atop the podium on the weekend amongst talents from two Asian powerhouses.

The talent coming out from France is for all to see now, particularly in the men’s singles. In the last three European Junior Championships, the men’s singles title went to France. While the 2017 winner, Toma Junior Popov won another title in Spain with week, the 2018 winner, Arnaud Merkle, also put on a show in Slovenia.

Playing some great attacking badminton all week, Merkle had to come from a game down against Bulgaria’s Daniel Nikolov in the semifinal. Merkle won the second game decisively but then found himself 15-10 down in the final game – had he overdone it in the second?

Merkle then had an important four-point run to close the gap and the fight was on. Merkle found a way to match point first, 20-19. Nikolov did not lay down, but on the third time of asking Merkle found his winning shot to reach the final.

It has been a long gruelling week and Indonesia’s Panji Ahmad Maulana awaited in the final after getting past Aram Mahmoud in his semifinal. However, the 23-year-old was not able to match the energy and determination of Merkle, who secured his title in just half an hour, winning 21-8, 21-10. To his fans, Merkle wrote.

-So good to win a tournament again!

Malaysia and Indonesia share the rest
The number three seed Hungarian, Agnes Korosi, came up short against Indonesia’s Mutiara Ayu Puspitasari in the women’s singles. Managing to force a decider, Korosi was caught out by a seven-point surge early in the third game which eventually led to Puspitasari winning 21-14, 19-21, 21-16.

Boe/ Kjær, who are 18 and 16 respectively, showed what they are capable of, defeating more experienced pairs such as third seeds Gianmarco Bailetti/ David Salutt and top seeds, Philip Birker/ Dominik Stipsits.