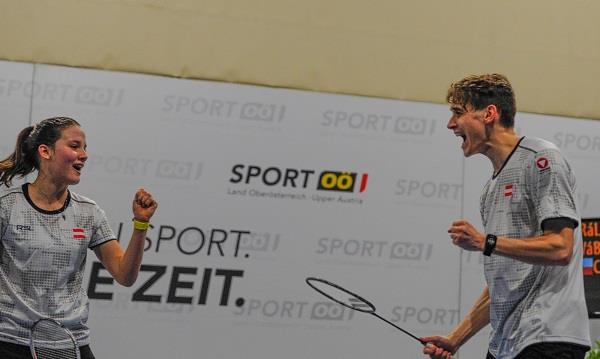 This week we move to Raiffeisen Sportpark in Graz for the Austrian Open 2021. The draws are stacked full of great talent. Let us dive in and see who to keep an eye on.

Qualification starts tomorrow and the tournament will run until Sunday 30 May.

Pablo Abian, 35, is gearing up for his fourth Olympic Games this year and would not want anything more than to win a title before travelling to Tokyo. The Spaniard who is top-seeded here made a strong start to the year with a win over Kashyap Parupalli in Switzerland.

Abian was runner-up at the Polish Open 2021 and most recently, was unfortunate to come up against a resilient Lee Dong Keun in his home tournament, the Spain Masters 2021. This time he faces a qualifier in round one and looking ahead towards the quarterfinals, seventh-seed Lucas Claerbout is the most likely opponent. With a 6-0 head-to-head against the Frenchman things are looking up for Abian.

With two tight losses this year to Toma Junior Popov, the eventual champion in France and Spain, Mads Christophersen will look to shine in Austria in the absence of his rival. The Dane starts by facing Bulgarian Ivan Rusev, who he beat at the Polish International 2019.

Arnaud Merkle also comes to Austria after taking the Slovenia International title. Riding the wave of glory, the French talent can be dangerous.

Andersen picking up the pace
Centre of Excellence (CoE) player Irina Amalie Andersen delivered a strong performance at the Spain Masters, just a couple of points away from the final four. In Austria, she comes in as the fourth seed and has a great chance to impress again.

The Dane has a qualifier in the first round and then will face either Agnes Korosi or Hristomira Popovska. If overcoming these challenges, she will anticipate going up against fellow CoE player Gayle Mahulette who is seeded number five.

The only time they have played competitively is in women’s doubles in 2015 at the Dutch International. Mahulette partnered Cheryl Seinen to defeat Andersen with Amalie Hertz Hansen to go on to take the title.

Clara Azurmendi is the top seed and also plays with eighth seed Beatriz Corrales in the women’s doubles.

Kolding and Søgaard reunited
After winning the Portuguese International Championships 2021 from qualification, Søgaard then partnered Scotland’s Adam Hall at the Spain Masters 2021. Sensationally, the scratch pairing who had not played with each other before that week, reached the semifinal, defeating some top pairs along the way.

Søgaard now reunites with the hard-hitting Mads Pieler Kolding and face another prospect of coming out of qualification to fight for the title.

Austrians Philip Birker/ Dominik Stipsits take the top seed spot at their home tournament, however, a great mix of experience and youthful exuberance can be seen in the other contenders. From the wise heads of fifth seeds Ronan Labar/ Lucas Corvee to the rising talents of third seeds Fabien Delrue/ William Villeger or sixth seeds Callum Hemming/ Steven Stallwood.

Germany, Austria and Switzerland
Serena Au Yeong/ Katharina Hochmeir did not have the Slovenia International they were expecting as top seeds. They come home now and will feature as second seeds, hoping to make amends. Top seeds are hailing from Germany, Annabella Jaeger/ Stine Küspert, who defeated the Austrians at the 2021 European Championships in Kyiv.

Switzerland’s Aline Müller/ Jenjira Stadelmann have recorded back-to-back quarterfinals, including that special one at the 2021 European Championships. They are certainly in contention for another good run here.

Malaysian’s Low Yeen Yuan/ Valeree Siow are travelling up north to Austria from having just won the Slovenia International 2021 without much fuss. Fellow Malaysians Anna Ching Yik Cheong/ Yap Cheng Wen are coming off the back of a quarterfinal result at the Spain Masters 2021, narrowly losing to a strong Danish pair of Amalie Magelund/ Freja Ravn in three games. They could be the unseeded contenders for the title.

Defending a 100 per cent record
Finalists in Portugal, William Villeger/ Sharone Bauer of France, are seeded number one in Austria, a new kind of pressure for the young pair. They face Germany’s Johannes Pistorius/ Annabella Jaeger in the opening round.

The pair that defeated them in that final, England’s Callum Hemming/ Jessica Pugh, are still unseeded but are aiming for maximum points once again.

There are plenty of banana skins along the way with some Malaysian raiders hoping to cause some upsets, while gaining valuable tournament experience. Namely, Choong Hon Jian/ Toh Ee Wei, who are undefeated this year, winning in Slovenia and Poland. Hunting three titles out of three, they start their campaign against Austria’s eighth seeds, Philip Birker/ Katharina Hochmeir.

Watch the matches live on www.badmintoneurope.tv