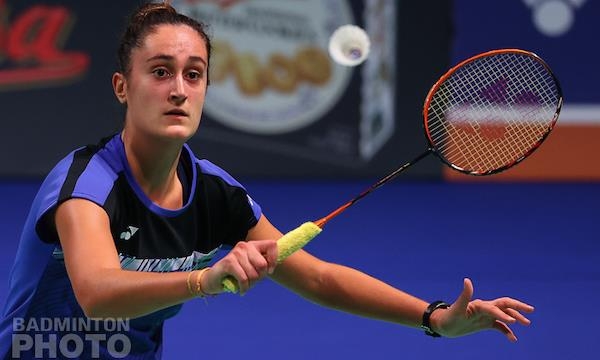 What an exciting tournament it has been, and it has provided some great performances from hugely talented young players. Here’s what happened in the decisive matches.

Tournaments are always an exciting time for players and badminton fans, and it is even more of a special event in the current situation where some are still getting cancelled, so any successful event is still a reason to celebrate. The Austrian Open 2021 was a great show of what is to come in the future of our sport, with many of the medallist being young stars. Here is how it went in the different categories.

Men’s singles: opponents meeting once again
Panji Ahmad Maulana had not played any tournaments since the end of 2019, coming back into the game at this year’s Slovenia International and he obtained great results despite the big break from international events. Maulana reached the finals where he faced Arnaud Merkle, but the French stood in his way to gold and eventually lost 8-21, 10-21.

This time, Maulana was ready to get to the top. Guatemala’s Kevin Cordon, who was third seed, put on quite a fight in the semifinal. Although the 23-year-old Indonesian player won in straight games, they were close to getting into a third game, with a tight result of 21-14, 26-24. In the final, Maulana would be facing no other than Merkle, the player who had recently prevented him from getting a champion title.

The 21-year-old French player had just come from winning against another Indonesian player, Ihsan Maulana Mustofa. Merkle and Maulana met again and this time, it was all quite different for the players. It was a tough three-game match in which the Indonesian looked as if he lacked confidence, rapidly regaining it to make the second game his.

It was to be seen what would happen since both players were giving a good fight, but the French singles player got the decisive game and therefore took the gold. Just like in the Spain Masters where only one French singles player, Toma Junior Popov, succeeded in getting a top spot among and all-Indonesian champion winners line up, Merkle was the only European on the men’s singles podium of this tournament.

Women’s singles: an all-European podium
The top Spanish female players had just come from an overall good performance at the Spain Masters, but still a bit bittersweet of not reaching the podium at home. Clara Azurmendi and Beatriz Corrales, who make just as powerful of a pair as they do when playing singles, did not fail to impress this time.

All women’s singles players gave it their all in the semifinals that offered three-game showdowns. The Danish Centre of Excellence player Irina Amalie Andersen won the first game after a difficult challenge, but top seed Clara Azurmendi eventually caught up with the Dane to get a win. It was a similar affair for Yaelle Hoyaux and Beatriz Corrales who also played a long match in which the clash winner lost the first game but eventually secured a win.

Hoyaux would have to face another Spaniard in the final. The French player is yet another example of all the young talents that her country is bringing into the badminton world. Still, she had a fierce opponent to get past, and Azurmendi demonstrated a skillful game that saw her winning gold 21-6, 21-14. It has been an excellent tournament for the Spanish player not just for the medal, but also for proving her worth against some tough rivals, such as Indian player Malvika Bansod.

Men’s doubles: a first for a young talented pair
Malaysia’s Junaidi Arif/Muhammad Haikal took the Austrian Open by storm. The 18-year-old players and 2020 German Junior champions defeated some of Europe’s most talented men’s doubles duos and did just the same with France’s Lucas Corvee/ Ronan Labar, earning a great result of 21-17, 21-15 and their first senior title.

Fourth seeds Daniel Hess/ Johannes Pistorius did not get to the finals after losing to Lucas Corvee/ Ronan Labar after a rather swift battle, and Denmark’s Mads Pieler Kolding/ Frederik Søgaard were back together after Søgaard’s interesting partnership with Scotand’s Adam Hall which earned him bronze and it was bronze again this time after losing to Arif/ Haikal.

Women’s doubles: Asia and Europe sharing the medals
Yap Cheng Wen changed her usual women’s doubles partner Vivian Hoo for Anna Ching Yik Cheong this year. They made their first appearance together at the Orleans Masters getting a poor result after losing in their first match at the tournament. Yet, their results after that have been encouraging so the Malaysian pair seemed to have rapidly found a balance that works for them.

Cheong/ Yap had to face Clara Azurmendi/ Beatric Corrales in the semifinals. The Spaniards had just won over fellow Malaysian pair Low Yeen Yuan/Valeree Siow, but Cheong/Yap would not make it easy for them. The Malaysian duo got through to the finals after a three-game quarterfinals match where they would have to play against Indonesia’s Ni Ketut Mahadewi Istarani/ Serena Kani.

Istarani/Kani faced off fourth seeds Aline Müller/ Jenjira Stadelmann in the semifinals. The Swiss pair have been doing good lately, reaching quarterfinals in both the European Championships and Portuguese International Championships this year. This time they progressed a step further and managed to get a medal, but Istarani/Kani were the ones to go on to eventually become women’s doubles champions of the tournament after defeating Cheong/Yap 21-11, 21-16.

Mixed doubles: third champion title for a successful duo
Mixed doubles was also a shared podium between Asia and Europe. Danes Emil Hybel/ Elisa Melgaard pressed top seeds William Villeger/ Sharone Bauer in a three-game match, but the French duo succeeded in finding a way that would get them to the finals. It was a Malaysian clash between Beh Chung Meng/Cheng Su Hui and Choong Hon Jian/Toh Ee Wei in which the latter won and just as in the other semifinal, it was a tough long battle between the two pairs.

Villeger/ Bauer are having a good year, winning silver in this year’s Portuguese International Championships and reaching quarter finals in the Spain Masters. However, the Malaysian pair of Choong/ Toh has had even a better year up until now. In just two months they had become Polish Open and Slovenia International champions, and they were hungry for more as they won over the French pair after three games, earning their third champion title of the year.