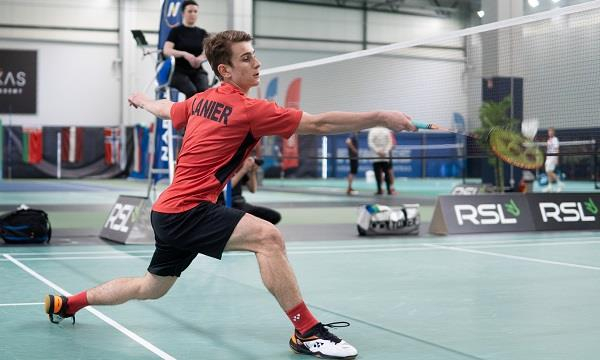 Did we witness something special at the Lithuanian International 2021? Alex Lanier, the French wonderkid, came through qualification to lift the title at just 16 years of age.

Axelsen has gone on to win multiple European titles, became World Champion and is the current Olympic bronze medallist coming into Tokyo. Time will tell what Lanier can achieve, but this win really makes the badminton community sit up and take notice.

Lanier battled through the qualification at the Slovenia International and Austrian Open to reach the quarterfinals. It was the same again in Lithuania, but this time he was primed to go even further. After a whopping 280 minutes (over 4.5 hours) on court, Lanier gave a modest raising of his arms to the small crowd in celebration before immediately approaching the net to thank his opponent.

The final
His opponent in the final was Canada’s B. R. Sankeerth who was seeking his first title in Europe. Sankeerth managed to hold off a couple of late pushes from Lanier in the first game. At 18-18, he used a lot of his experience of being in these situations to win 21-18.

The second was looking to go in a similar rhythm, with Sankeerth managing to build a 17-12 lead. Now, Lanier does have a knack for going on big surges of points. This time, and what a great time to do it, the young Frenchman put seven points together, taking the lead at 19-17.

Sankeerth did react but was not able to find a match point opportunity. Lanier on the other hand converted on his third game point to force a decider.

Once again, the two battled hard, Lanier changed ends 11-9 up. After the break, it was Lanier’s turn to defend a lead. The breaking point was at 16-15, when once more Lanier went on a terrific run, this time it was five points all the way to his first title win. Players always say they remember their first one, and this will certainly be one he will never forget.

Double for Vestergaard
Mads Vestergaard picked up two titles for himself in Lithuania. After a 50 minute tussle with Ukrainians Danylo Bosniuk/ Oleksandar Shmundyak, Vestergaard and Emil Lauritzen came from being 18-16 down in the deciding game to win 21-18.

In the mixed doubles, it was a much more one-sided final. Vestergaard and Clara Løber defeated Kazakh pair Dmitriy Panarin/ Kamila Smagulova, 21-12, 21-16.

Malvika Bansod, 19, impressed at the Austrian Open, narrowly losing in three games in the quarterfinal. This time she comes away with the title without dropping a game. The Indian left-hander defeated Ireland’s Rachel Darragh, 21-14, 21-11.