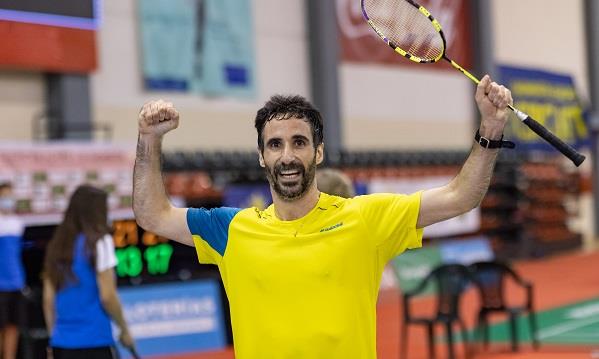 Recently celebrating his 36th birthday, Pablo Abian receives the best gift in the form of a second Spanish International title.

La Nucía was the location of the Spanish International, which was cancelled in 2020. This marked the last opportunity for some competitive practice for Abian before the Tokyo Olympics.

-Olympics is officially confirmed, and it’s time to face the final stretch of preparation. This will be the last championship prior to the Olympics, Abian told his fans on his Instagram.

Abian reached the final of the Polish Open in March and after unfortunately missing out on the European Championships, he was on the wrong end of a long slog against Korea’s Lee Dong Keun at the Spain Masters. With another tournament in Spain, he would want nothing more than a confidence-boosting win before setting off to Japan.

Interestingly, in a time where tournaments have been few and far between, to get as much badminton in as possible, Abian played men’s doubles with his older brother Javier who this month turned 40. They got through a few qualification rounds before losing out to the eventual finalists, Lucas Corvee/ Ronan Labar from France.

Strong tests
In his usual category, Abian was seeded at number three. The first two rounds were challenging ones, against France’s Lucas Claerbout and Malaysia’s Misbun Ramdan Mohmed Misbun, two experienced players. However, Abian was able to dispatch them in straightforward two-game wins.

In the quarterfinal, Arnaud Merkle, who was coming off the back of a win at the Slovenia International and a runners-up finish at the Austrian Open, posed an intriguing matchup. There was nothing between them in the first game until a six-point run after the break from Abian.

Securing the first game 21-14, Abian once again went on a big run in the second game, this time eight points to build a 9-3 lead. Merkle hit right back with a run of his own and it was 11-9 to the Spaniard at the mid-way point. This was the theme to the end, Merkle trying to chase down Abian, but the local star was comfortable being the front runner and won 21-17.

Brazil’s Ygor Coelho was Abian’s opponent in the semifinal. Despite an almost identical scoreline, there were no peaks and troughs like in the quarterfinals. Abian never lost the lead, remained steady, and won 21-13, 21-17.

The final was all about holding your nerve at the key moments. Abian broke away in the opening game to reach 16-9. However, he somehow allowed Louda to work his way back to 20-20, not converting two game points. On the third time of asking, he secured the game 22-20.

Louda, riding the wave of momentum, took control of much of the second game. Although, Abian never went away and even found himself 17-16 up. Louda reacted strongly to this with four straight points to reach 20. Abian saved three game points, but Louda, much like Abian in game one, found a way and won 22-20.

Abian prides himself in stamina, so with the match going to three, Abian would have been confident even with Louda starting well and leading 10-8. Abian then went on a nine-point run starting before and continuing after the change of ends. At 17-10, it was only a matter of time before Abian took the title.

The last time he won the Spanish International was in 2015, where he was seeded eighth and defeated Denmark’s Rasmus Fladberg in the final.

For the full results from finals day, click here.