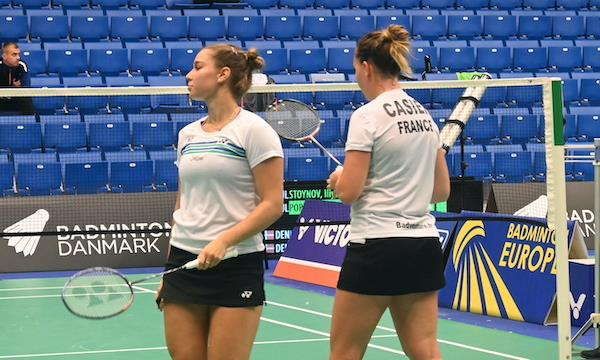 The young women’s doubles pair of Ophelia Casier/ Yaelle Hoyaux, France, kicked off their journey at Victor Denmark Masters 2021 with a win over Clara Løber/ Mette Werge who were playing on home soil.

The first day of Victor Denmark Masters 2021 has awarded us with some impressive, close three-game matches. One of these was the encounter between two women’s doubles duos, Danes Clara Løber/ Mette Werge and France’s Ophelia Casier/ Yaelle Hoyaux.

-We are really happy to have won this match because it was a difficult one, Casier said.

A rewarding start
The opening match for both pairs ended up being in an hour-long battle that saw Løber/ Werge and Casier/ Hoyaux striking back whenever any of them took the lead. The French pair secured a win in the first game with a three points lead, but the Danes did not want to let go of the tournament so early and were victorious in a tight second game.

-We needed to change a bit the tactics and be smarter about the way we attacked so it would be easier. In the second game we maybe wanted to win too much, Hoyaux explained.

Something changed in the third game as the French got to close the match with a bigger lead in the decider, 21-14.

-In the third game we tried to be a bit more relaxed and play the style of game that we usually play, Hoyaux said.

-I think we were more focused than them, so I think that makes the difference, Casier stated.

The badminton events at the Olympics have finished just recently but many are already looking to the next ones. Paris 2024 could be a special one as the country of the host city is bringing to European badminton some of the best upcoming talents. Casier/ Hoyaux do not want to think about it too much yet, as they still feel that there is a long way to go.

-When watching it [the Olympics] on TV, every athlete wants to be there but I would say that we are still pretty young. It is still in three years, we have some steps to go before that and then we will see where we are in 2024, stated Hoyaux.

Tough opponents ahead
Today’s win has secured them a move into the main draw, where they will be facing the Dutch pair Debora Jille/ Alyssa Tirtosentono. The pair’s victory shows they are strong fighters.

-It is our first match in women’s doubles [in this tournament], so we are happy about our victory, Casier said.

Debora Jille openly spoke about mental health in the most recent episode of the BEC Podcast. Click here to listen.