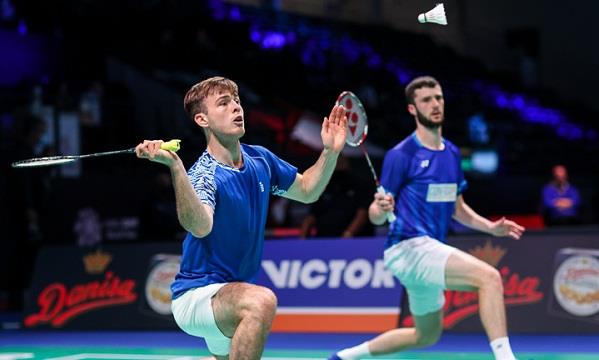 After some time apart due to an injury for Dunn, the Scottish number one seeds are reunited. Despite some early nerves, they soon rekindled their connection and are through to the semifinals.

In their first match back, they were made to sweat by the Czech pair, Ondřej Kral/ Adam Mendrek, winning by the narrow margin of 23-21 21-18.

-Last night we had a bad start to the tournament. The late night may have got to us a little bit, but we were a lot more controlled and better today. So, we are happy to get through it to be honest.

Today they faced a confident Danish pair of Kristian Høholdt Kræmer/ Marcus Rindshøj and managed to dispatch them 21-12, 21-13. Dunn was itching to get and court and was pleased with how it turned out today.

-I was really looking forward to getting back playing as I have been out for a little while. I must say that I thought my return would go a little bit better than it did last night. I think the nerves and the moment maybe got to me a bit. So, I’m pleased with how this performance went. It was pretty clinical, and I think I got a little bit of rhythm back.

A quick tournament
Many players have become accustomed to tight restrictions at tournaments. The Victor Denmark Masters 2021 has been able to loosen these restrictions this week and for Hall it’s been a big contrast to what he’s used to.

-Yeah, it’s so odd. It feels like such a quick tournament now because we are used to coming five days before the tournament and having so many days to train in the hall. When we arrived on Thursday night, I thought to myself we are playing tomorrow and flying home Sunday, so this is strange. I am still getting used to not needing to wear a mask everywhere because back home we are still a bit strict.

Happy for Lee/ Wang
Asking the pair if they enjoyed watching the Olympics on TV, Dunn responded.

-We loved it; I think everyone does. We’ve seen a lot of players on social media getting a lot of motivation from it. Especially for me not playing at the time, my motivation was pretty high anyway, so it upped it a little bit more, so it was really good.

Hall added in his congratulations to the men’s doubles gold medallists Lee/ Wang, a pair who left an impression on him.

-Especially looking at who won the Olympics as well, other than the women’s singles, none of the top seeds won the gold. We are also really happy for Lee Yang/ Wang Chi-lin winning men’s doubles gold because they are the only pair we’ve played where I’ve thought wow, I actually have no idea what to do against you two. Also, they are such nice guys off the court as well and we are really happy for them.