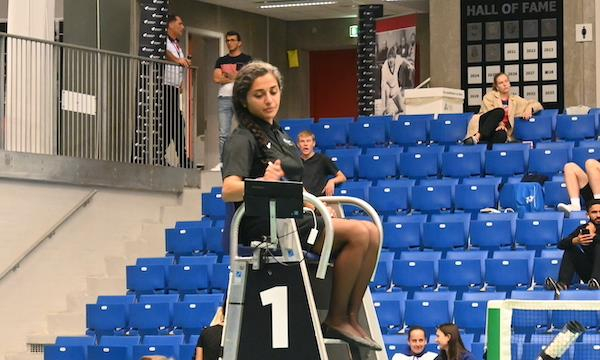 We talked to umpire Sara Shahhosseini at the Victor Denmark Masters 2021 to hear about her role in badminton and her love for the sport.

A love for badminton so big that it has taken her from Iran to different European countries. But this weekend, umpire Shahhosseini sits atop the high chair at the Victor Denmark Masters, watching player’s every move to make sure it all runs smoothly.

Originally from Iran, Shahhosseini moved to the Spanish city of Barcelona 12 years ago. She later relocated to Austria, and just months ago made Denmark her new home. She has certainly changed her location many times, but if there is a constant in her life, that is badminton.

— I think I was one of those people that was born with a badminton racket. My dad was a badminton coach and Umpire, so I have been playing badminton since I was a kid. I played it more seriously when I was in Iran, but when I moved to Spain, I was just coaching so I did not really practice myself. Now I am in Denmark, and I want to play badminton again, Shahhosseini said.

Iran at the Olympics

The umpire’s father fuelled her passion for the sport, but badminton is also popular in her native country. Just this year, Iran witnessed a historic moment at the Olympics as Soraya Aghaei Hajiagha was the first ever female badminton player to represent the country.

— Everyone plays badminton in Iran, at least for fun. If you go to a party, you always see people playing. I think in Iran the level is okay, but I would not say it is high. There was a player from Iran playing in the Olympics this year.

It comes as no surprise then that all these factors added to her dedicating her life to this sport. What begins as a favourite leisure activity has eventually become a big part of her life as a player, coach, and umpire. It is her experience as a player that pushed her to pursue a career in umpiring.

-When I was a player, I saw some unfairness and I decided that I wanted to become an umpire myself. I have been umpiring unofficially since I was sixteen, but in Iran in that time you could become an umpire when you were 18 so I have been umpiring officially since then. In Spain, I umpired for national tournaments as well, then in national tournaments in Austria, and in Europe mostly, Shahhosseini explained.

Umpiring in so many different places as Shahhosseini has done is an invaluable experience that is just as challenging as it is rewarding. Her job comes with an additional difficulty that is essential to umpiring: the language. However, she has had no problems in rapidly adapting to umpiring in the local language and she is already looking forward to the next one on her list.

-It has been fun. My next challenge is umpiring in Danish. I have been umpiring in Spanish, of course, and in Persian. In Austria I tried to do it in German, and it worked well. So now I am working on the Danish.

Despite the long hours on court, focusing on all the details of the match that sometimes go unseen by most, Shahhosseini is delighted with what she does and identifies one factor as the most important to being an umpire.