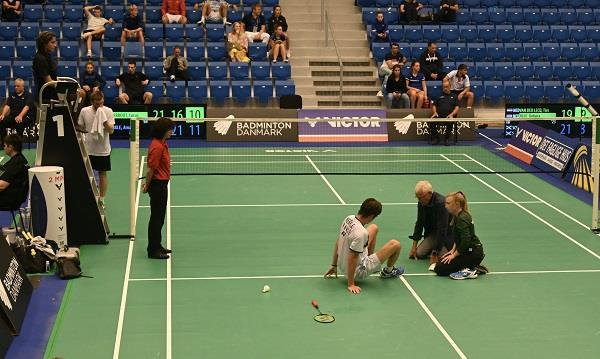 In a crazy 78-minute marathon match between two French fighters, Arnaud Merkle found the drive from somewhere to pick himself off the floor with an ice pack on his leg to go on to take the win.

Despite not having played in competition before, the Arnaud Merkle and Lucas Claerbout clash was bound to be the tough slog it turned out to be. The never give up attitude on both sides of the net culminated in long energy-sapping rallies. At 11-10 in the third game, Merkle found himself on the floor in a lot of pain.

-I just slipped after a smash and I felt my ankle twist. It was really difficult but when I was on the floor I just thought about all the difficult times that I spent during the lockdown and when I was not able to play during the Olympic qualification, Merkle explained.

With Merkle hold an icepack to his ankle, pointing to where the discomfort was to the doctor, it was not looking good at all. Onlookers were already stating that he will not play any more part in the match. However, Merkle made the decision to carry on.

-I just wanted to give my best. If I lose I don’t care, I just want to give my all and I felt that I still had something. I tried and it feels so nice because the last times have been so difficult. After Austria, I had surgery on my feet and today I am able to play well so I am very happy.

Styles make matches
Even before this drama, the match was a great spectacle. Merkle explains why this was the case and what made the difference, with the match ending 19-21, 21-16, 21-18.

-My defence was good, but so was his. He is a really great fighter and he always gives everything on court. It was a crazy nice match for me and for him too I think. In my opinion, the difference, in the end, was my attacking skills and I think I won the second game because of the change of speed.

The victor of the match two courts down would play the winner. It was also a long three-game match with Brian Yang defeating Ade Resky Dwicahyo. Merkle comments on how he will get ready for this match.

-Actually, I want to see the doctor. I think it will be a good fight if my body is in shape tomorrow. Brian is a really good player, last time we played was in the Youth Olympics three years ago. I am hoping for a good game tomorrow and I hope he will be ready.