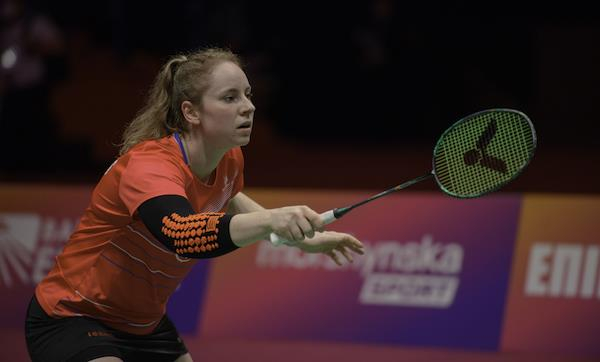 Debora Jille and Ties van der Lecq are happy to be back on court with no face masks.

Most people know how it feels to wear a face mask. In the last 18 months, COVID-19 has been part of daily life, but society is slowly starting to reopen, which includesinternational badminton tournaments.

At Victor Denmark Masters, the players do not need to wear face masks, and it more or less looks like a “normal” badminton tournament.

— It feels like a normal tournament again. It is amazing. We could enter without masks, and of course, you try to keep a bit of distance still, but it feels really good, Debora Jille said.

Victor Denmark Masters is the first tournament for the Dutch mixed doubles pair since the Spain Masters in May.

Time for revenge
In their opening match of the tournament, Jille and van der Lecq won against the young Danes Christine Busch/Rasmus Espersen, who beat the Dutch pair at the SaarLorLux Open 2020.

Ready to battle the second seeds
Jille and van der Lecq are ready for the second round winning in straight games 21-18 21-18.

— In the first game both pairs were nervous. We had to get the feeling, but I think our tactic was quite well executed. In the second game, we kept it cool and with no stress in the end, Ties van der Lecq stated.

In the second round, Debora Jille and Ties van der Lecq will face Adam Hall/Julie Macpherson, Scotland, who are seeded second in the tournament.