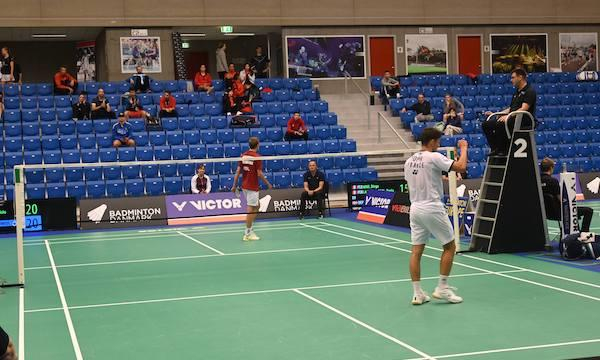 After a close first game, Christo Popov got into his rhythm and secured a spot in the second round of the Denmark Masters 2021.

Every time young Christo Popov walks on court, all eyes are on him. The French talent, who won more medals than most players during his time as a youth player, always attracts attention to him being one of the biggest talents in Europe for a number of years now.

Popov, who turned 19 in March, did not qualify for the Olympics, which means that this week he is playing his first tournament since the Spain Masters in May.

Local opponent
In the opening round of Denmark Masters 2021, he faced local Rasmus Messerschmidt, who was promoted from qualification.

Popov took the lead from the beginning of the first game, but despite fighting his way back into the game after trailing 19-12, it was not enough for Messerschmidt, who lost the first game 24-22.

— I think we both were a bit stressed in the first game and we did not get used to the hall. There were too many easy mistakes from both of us, and it was close because of that, Popov said.

13 points lead – 16 points win
In the second game, Popov dominated. The French talent took a 13-0 lead and winning the game 21-5, he made it to the second round, where he will be facing another Danish men’s singles player. Mads Christophersen and Magnus Johannesen will be fighting for a spot in the second round.

— In the second game, he was maybe a bit frustrated and stressed. I played better and made less mistakes, and that made the difference, Popov stated.

— Most players play freely when you have a lead like that. I kept the tactic and tried to do less mistakes. If I can win 21-0, I want to do that.