Amalie Magelund/ Freja Ravn: We kept on going and didn’t let them in

Amalie Magelund/ Freja Ravn: We kept on going and didn’t let them in 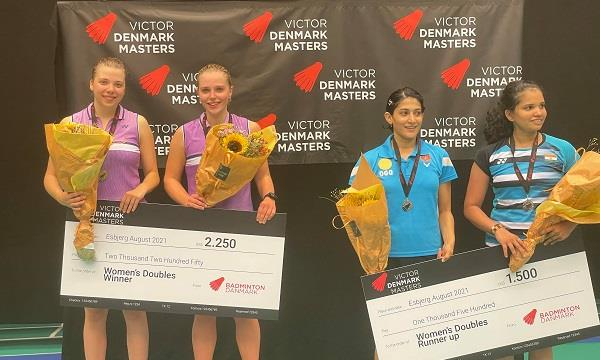 In the last match of finals day of the Victor Denmark Masters 2021, Amalie Magelund/ Freja Ravn scored a big win against an experienced and resilient Indian pair of Ashwini Ponnappa/ Reddy N. Sikki.

The two pairs have faced twice this year. The Danes recorded a dominant win at the Swiss Open, however, the Indians came back with a narrow win at the Orleans Masters. Today was an unofficial decider and after almost an hour on court, the Danes took the win 15-21 21-19 21-14.

-We are really happy. It’s amazing to get this win on home soil. It was tough in there, they are a really good pair and we know that they can bring out a really high level. But I feel that we brought our own level in the second and third games, Magelund stated.

After the Indians took the opener, the Danes were game points up in the second, but there was a late surge that they had to fend off.

-Yeah, it was very important. We came out a bit slow in the first game and I actually thought we got out very good in the second and they stepped up towards the end so I think it was very good that we closed it, Ravn admitted.

The difference
The Danes showed great mental strength and determination in the third game.

-We really found our play in the third game. We kept on going, we didn’t let them in so that made the difference in the end, Magelund said.

Amalie had two runner-up finishes at the Spain Masters, another earlier today at the Denmark Masters in the mixed doubles but was relieved she could get the title this time.

-I am very happy, it was a tough match in the mixed doubles earlier, I am very sad that we didn’t get that win. So it was very nice to get this win today.