A hugely successful tournament for Lundgaard/ Thyrri after a difficult spring

A hugely successful tournament for Lundgaard/ Thyrri after a difficult spring 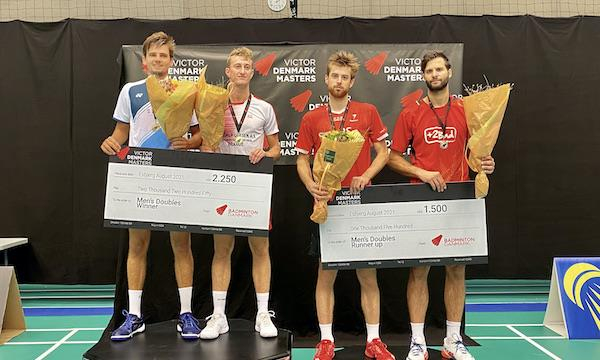 The French pair of Lucas Corvee/ Ronan Labar have had to face Danish combinations all throughout the Victor Denmark Masters 2021 except for the semifinal, where they played against Krishna Prasad Garaga/ Vishnu Vardhan Goud Panjala in a tough three-game encounter. The Danes on the other side of the net for the final were Daniel Lundgaard/ Mathias Thyrri.

Trust as the base for success
Lundgaard/ Thyrri moved into the semifinals with a straight game win and standing on their way to the deciding match was the pair of Alexander Dunn/ Adam Hall, Scotland. However, in the second game, the Scottish pair retired while the Danes took the lead, and so they got into the finals.

The experienced French pair tried to stop Lundgaard/Thyrri from taking the first game and despite their efforts, the victory was for the Danes. Both pairs fought strongly showing great performances that were equally efficient, but the Danes took a close lead again and closed the match 24-22 21-19.

-The whole tournament for us, we have been feeling great on court. It was close, at the end of the first game we felt like we knew what we were going to do, and we trusted each other on the court so I think that was the big difference, Thyrri explained.

Hungry for a victory after a tough setback
Lundgaard/ Thyrri’s last big result was at the Saarlorlux Open 2020. The pair lost to compatriots Jeppe Bay/ Lasse Mølhede in the final, but still achieved a spot as runner-ups in the important tournament.

However, the first half of this year has not been so easy for the Danes. Just this spring, both players were infected with COVID-19, a huge blow. Luckily, the pair have made a full recovery as they were able to perform so outstandingly that they would become this year’s Victor Denmark Masters’ men’s doubles champions.

-We feel very good. It was a tough spring for us, we both got COVID-19, so we were very hungry going into this tournament, it is perfect for us, Lundgaard said.