Line Christophersen: My brother joked about the match so I am happy that I won 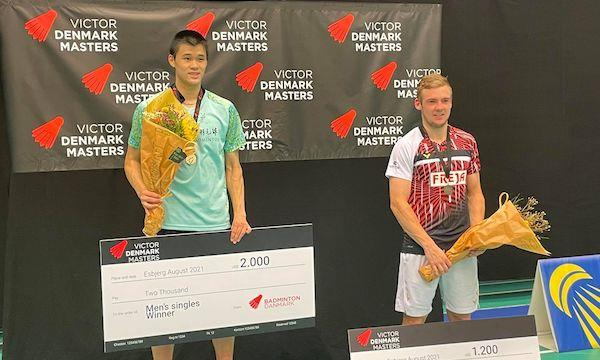 It was a gruelling battle between two young players in the men’s singles final, but the Canadian took the title with great determination.

It was bound to be a fierce match between Canada’s Brian Yang and Dane Victor Svendsen. Both had shown impressive performances throughout the tournament no matter the opponent they faced, and so they met for a great final in Esbjerg.

Yang and Svendsen had played against each other only on one occasion before today. The seventh-seeded Danish player ran into Yang in the SaarLorLux Open 2020 and just like last time, both took the match to a three-game encounter and the Canadian player was victorious. This time he was not just taking a win from Svendsen, but also the title.

Powerful defence against strong smashes
Svendsen, the home favourite, fought hard showing the determination that could be witnessed in the previous clashes at the tournament. It was a great start for the Dane, who was showing his powerful strength through his hits which Yang did not get to counterattack.

-Victor has a really strong smash, so in the first game I think I let him attack so easily and so he was winning points off the smash right away, Yang said.

Yet, something changed in the second game. Svendsen’s strong smashes did not seem to be working so well against the number seven seed, who stepped up his defence to stood up to the opponent’s attacks.

-I think I just sharpened up my defence in the second game and I tried to control my lifts better. I just tried to defend a lot better and I think that gave him more pressure to hit the perfect smash down the line. It also tired him up, because he had to smash on full power a lot more. That kind of showed in the third game, where he was super tired, Yang explained.

Svendsen was visibly tired by the third game, falling exhausted to the floor towards the end of the third game, but the Dane did not give up against Yang, who seemed to still have lots of energy to keep going. Still, Svendsen’s huge efforts were not enough and the Canadian player finished the decider with a win to take the title, 16-21 21-17 21-15.

An Olympic summer
This summer has been a rewarding one for Yang. Just a couple of weeks ago, he got to attend the Tokyo 2020 Olympics for his debut representing Canada in the big event. He put a lot of preparation and energy into it, but Yang demonstrated that he was still going strong.

-I feel really satisfied with myself. I have had a lot of good wins in this tournament, especially right after coming back from the Olympics. I thought I was not really in the best shape after I went back to Canada and then here, but it turns out I got back into my normal fitness and I was able to perform really well, so I am proud.