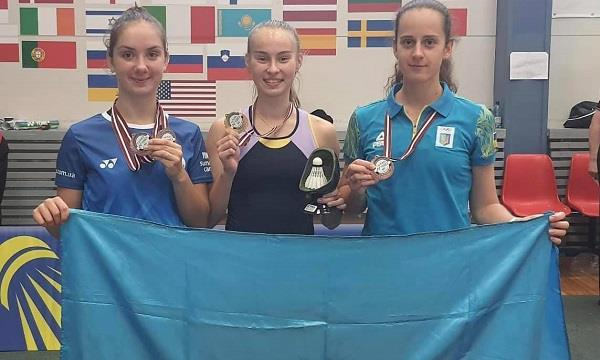 Jelgava, Latvia, 41 kilometres southwest of the capital Riga was the host of the YONEX Latvia International 2021 and saw a fusion of European and Asian players battle it out for the titles.

Ukraine’s Danylo Bosniuk in the men’s singles and Mariia Stoliarenko/ Yelyzaveta Zharka in the women’s doubles reached the semifinals, the latter losing out to the eventual winners.

The Eastern European nation managed to set up an all-Ukrainian final in the women’s singles. Polina Buhrova and Mariia Stoliarenko together won a bronze medal at the 2020 European Championships in the women’s doubles. In Latvia, the young talents were on opposite sides of the net fighting it out for a first senior title.

The two have faced off against each other four times before at junior events. Buhrova kept her clean record by winning for the fifth time, 21-13, 21-16, completing a great performance by the Ukrainian team. Luca Crippa, Ukrainian Badminton Federation Technical Director, was over the moon.

-Medals and performances are never a matter of luck. This is why Ukraine must be proud of this team that is working so hard. Thanks to the players and to all the people that every day support them and work hard for them. Every single person in the clubs, in the federation and in the country is important for the development of players and we will always support and believe in our athletes!

Lanier was so close to second title
In the lead up to the 2021 European U17 Championships, Frenchman Alex Lanier has been turning heads. He became the youngest to win a senior title at just 16 years of age with the RSL Lithuanian International 2021. He nearly made it two!

Lanier defeated Danylo Bosniuk in the semifinal after a tight three-game match. In the final, he faced India’s Meiraba Luwang Maisnam. Lanier fought back strongly after being a game down to force a decider and led most of the way. However, the Indian got into his rhythm at the right time and secured the first match point at 20-19. Able to hold his nerve, Maisnam eventually celebrated the win, 21-15, 12-21, 22-20.