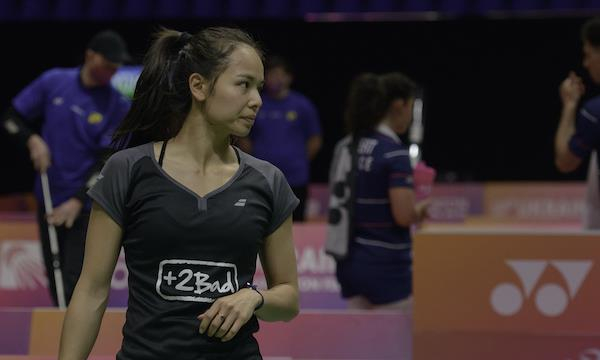 Anne Tran had recently started a new chapter with not one but two new doubles partners and the results at the Polish International 2021 prove that the duos are a great match from the very beginning.

The 25-year-old played her last matches with doubles partners Emilie Lefel and Ronan Labar earlier this year. Now, Anne Tran has her eyes set on the upcoming Olympics that will be played at her native country in three years’ time.

Having recently partnered with 20-year-old William Villeger in mixed doubles and 22-year-old Margot Lambert in women’s doubles, these partnerships are a great mix of Tran’s experience and France’s upcoming talents, and the combination seems to be working well as Tran’s and her partners results have shown in the Polish International 2021.

-Two great wins with my new partners at the Polish Open. It starts well, Tran said on her social media.

Gold-hued beginnings
Margot Lambert/ Anne Tran’s first two matches in the tournament posed no trouble to the French pair, but they stumbled upon a bump on their road to becoming champions. They faced German pair Annabella Jaeger/ Leona Michalski in the semifinals and after winning the first game, their opponents stroke back to secure a win in the second game.

Tran/Lambert reacted just on time to get the decisive win to move to the final in which they faced India’s Treesa Jolly/ Gayatri Gopichand Pullela, who would have to settle for silver as the French pair got away with a win and therefore gold. Bronze went to two other European pairs — Germany’s Annabella Jaeger/ Leona Michalski and Sweden’s Johanna Magnusson/ Clara Nistad.

In mixed doubles, Anne Tran cruised to an all straight wins path to victory in the tournament with partner William Villeger. There was no way of stopping them and so they got the gold with Pawel Smilowski/ Wiktoria Amek that were playing on home soil got silver, while England’s Rory Easton/ Annie Lado and Denmark’s Emil Hybel/ Elisa Melgaard shared the bronze.

More Europeans on the podiums
Despite there not being more European champions, the podiums were not empty of European representatives. Men’s singles saw Collins Valentine Filimon, Austria, and Jan Louda, Czech Republic, securing bronze.

It was a similar result for Europe in women’s singles. Ukraine’s 17-year-old Polina Buhrova, who became the Victor Ukraine International 2021 women’s singles champion this same month, shared the bottom spot of the podium with Swede Edith Urell.

Villeger’s triumph with Anne Tran in mixed doubles was not his only big success in the Polish International. In men’s doubles, he won the bronze medal with partner Fabien Delrue, and Austria’s Collins Valentine Filimon/ Adi Pratama followed on the steps to secure the same medal. It was a better result for Englishmen Rory Easton/ Zach Russ, who got their hands on the silver.