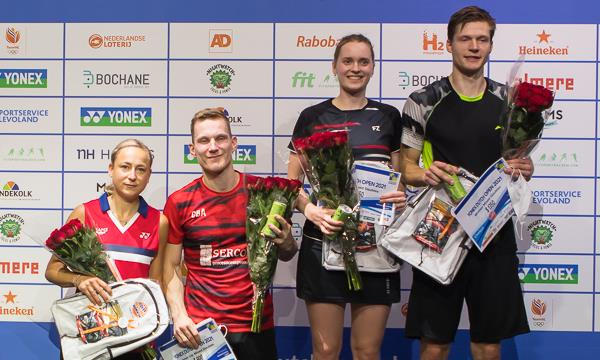 The Dutch pair of Robin Tabeling/ Selena Piek had stood a class above their opponents so far. However, the final unfolded differently. The home favourites took on the second seeds Mikkel Mikkelsen/ Rikke Soby. The Danes won the opener, only for the Dutch to bounce back in the second. Mikkelsen/ Soby reciprocated as they took control in the decider. The title was theirs after 55 minutes: 21-18, 13-21, 21-15. It was their first major title as a pair.

In the women’s doubles final, Piek’s longtime partner Cheryl Seinen resumed her successful European Mixed Team Championships 2021 pairing with Debora Jille for the home tournament. Like their compatriots in the mixed doubles, they failed to get past the final hurdle. They lost to Johanna Magnusson/ Clara Nistad in three games. The Swedish duo made an incredible comeback after dropping the first game to emerge triumphant 17-21, 21-14, 21-12.

Clinical Loh Kean Yew
Having saved two match points against Julien Karraggi in the quarterfinals, Lakshya Sen managed to continue his title defense. However, he was outplayed by another talented youngster Loh Kean Yew in the final.

Best known for beating the legendary Lin Dan to win Thailand Masters 2019, the Singaporean was in control throughout the match. He won 21-12, 21-16 in 36 minutes. It was an impressive tournament by Kean Yew: winning all the matches in straight games and beating Nhat Nguyen in the quarterfinals.

Perfect outing for Singapore
The new Malaysian men’s doubles combination of Rio Olympics silver medallist Tan Wee Kiong with another top player Tan Kian Meng is off to a positive start. The duo barely had any trouble as they eased past their opponents to reach the finals. They lost to the Singaporeans Hee Yong Kai Terry/ Loh Kean Hean today 21-14, 18-21, 22-20. The 26-year-olds saved a match point to claim the victory.

In a similar fashion yesterday, Kai Terry/ Kean Hean had eked past the Danes Emil Lauritzen/ Mads Vestergaard in the semifinals, winning 24-22 in the decider. Moreover, Kai Terry with his partner Tan Wei Han, had lost in the mixed doubles semifinals 21-17, 21-18 to Tabeling/ Piek.

Kuuba vs Holden
Following the withdrawal of the top seed Neslihan Yigit, the Estonian star Kristin Kuuba justified her second seed. She overcame a stiff opposition from the rising English player Abigail Holden.

The 22-year-old Holden had gained some valuable experience in the recently concluded Sudirman Cup. While she beat the Malaysian Kisona Selvaduray, she also put up a good show against one of the world’s best: Akane Yamaguchi. Holden continued her good form in the Dutch Open, convincingly reaching the final without dropping a game.

Down 8-16 in the opener, she did extremely well to lead 20-19, but eventually fell short. A stubborn Kuuba dug deep when it mattered the most. She won her fourth international title 23-21, 21-18.