An Irish Open with a Dutch golden touch

An Irish Open with a Dutch golden touch 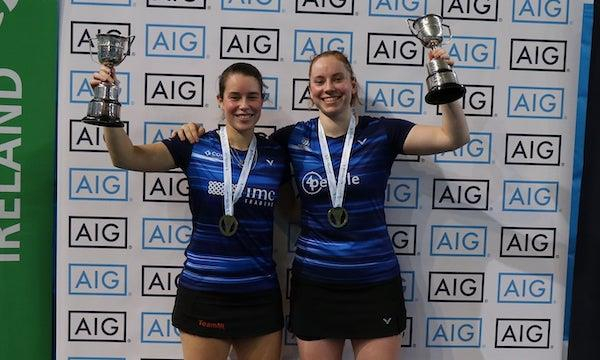 Not all the action is taking place in Bali right now. The Hungarian International kicked off the European Badminton Circuit in what is being quite a busy November in Europe, and last week it was the turn of the AIG FZ FORZA Irish Open 2021.

The historic tournament took place 17-21 November and we could see a mix of European and Asian talents reaching the podium.

Good tournament for the Dutch in doubles
Robin Tabeling/ Selena Piek had a déjà-vu moment in the finals, as they met once again with Mikkel Mikkelsen/ Rikke Søby Hansen. The Danes had beat them to the gold on their home soil at the Dutch Open.

The mixed doubles top seeds delivered with a superb result. This time it was gold for Netherlands, as they secured the win in straight games, 21-18 21-15. Another Danish pair, Mads Vestergaard/ Natasja P. Anthonisen, and Gregory Mairs/ Jenny Moore, won the bronze.

The mixed doubles was not the only gold for the Netherlands. The recent pairing of Debora Jille/ Cheryl Seinen has proven to be a success in their performances so far, and their last test in this event were Hsuan-Yu Wendy Chen/ Gronya Somerville.

The unseeded Australian pair defeated top seeds Christine Busch/ Amalie Schulz and Ashwini Bhat K./ Shikha Gautam on their way to the finals. The fight for gold was the longest out of all the finals and after a tough clash, the Dutch pair won 15-21, 21-14, 21-14.

Denmark representing Europe in singles podium
Despite not leaving with any golds, Denmark got to the podium in most of the categories. They won three silver medals – one in the doubles category with Mikkel Mikkelsen/ Rikke Søby, and two more in singles.

Line Højmark Kjaersfeldt is no stranger to standing on the Irish Open podium. Having won it in 2012 and 2016, and finishing as runner-up in 2014, the top seeded Dane was ready to achieve one of the top spots this year.

Kjaersfeldt won silver after losing the three-game final clash against Wen Chi Hsu, 21-9, 14-21, 21-15. Fellow Dane Mads Christophersen’s last final was at the Orléans Masters earlier this year, but he did it again at the Irish Open.

Christophersen met with home favourite Nhat Nguyen in the semifinals and secured his spot in the final with a win in three games, leaving Ireland with what was their last hope for a gold medal in their home tournament. The Dane then lost to Yeoh Seng Zoe, finishing as runner-up.