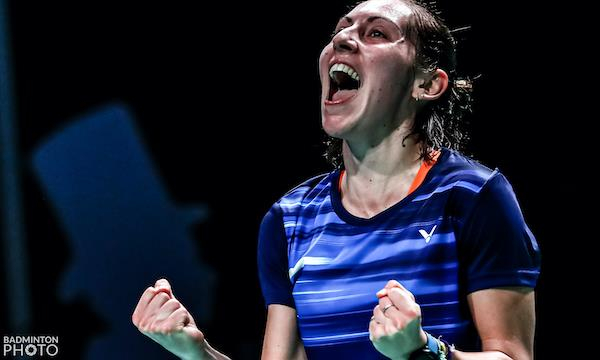 One of the oldest badminton tournaments in the world will be held from 25-28 November this year.

Return of the home favourite
If the top two women’s singles seeds reach the finals, it will be a repeat of the 2015 edition: Kirsty Gilmour vs Line Hojmark Kjaersfeldt. The Dane had beaten the home favourite back then. Gilmour is a two-time champion here, winning consecutive titles in 2017 and 2018. She faces a tricky opener against the recent Irish Open winner Wen Chi Hsu. The Chinese Taipei athlete had surprised many by outplaying Kjaersfeldt last week.

The third seed Kristin Kuuba and the youngster Edith Urell are the players to watch. Gayle Mahulette is the sole CoE representative and has been seeded sixth.

The defending champions
Alexander Dunn/ Adam Hall won the home title as third seeds in 2019. They are the top seeds this year. The Scottish pair will be joined by their eighth-seeded compatriots: the Grimley twins. In a repeat of the Hungarian International 2021 men’s doubles final, Emil Lauritzen/ Mads Vestergaard will be up against the English duo Rory Easton/ Zach Russ in the first round.

Despite a whole host of talented pairs in the main draw, it will not be surprising to have a qualifying pair atop the podium. The two-time World Championships bronze medallists Kim Gi Jung/ Kim Sa Rang are resuming their successful partnership.

Women’s doubles
Rachel Honderich/ Kristen Tsai are the women’s doubles top seeds. They will hope to build up on the experience of playing in major tournaments: Tokyo Olympics, Denmark and French Open. The Canadians will face a stiff competition from the Danes Christine Busch/ Amalie Schulz (third seeds) and the Irish Open champions Debora Jille/ Cheryl Seinen (seventh seeds). The Scots Julie Macpherson and Ciara Torrance are the second seeds.