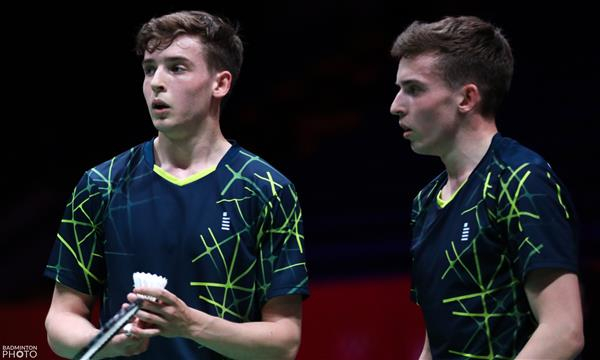 Three years ago, Matthew and Christopher Grimley won the silver at the 2018 European Junior Championships. Today they wake up as Scottish Open 2021 champions.

The Scottish twin brother combination has been steadily gaining experience on the European circuit and last week entered into their home tournament as number eight seeds. With plenty of talent on show, including their compatriots and reigning champions, Adam Hall/ Alexander Dunn, they did not predict the sort of week they ended up having.

-We came here this week hoping to do well, but we never felt that we will be holding the trophy at the end.

Tough from the beginning
The Grimleys won 11 titles at Junior level and reached the final of the Portuguese International in consecutive years. In order to win a title at this level, they knew the journey will be a tough one, and in Glasgow, it certainly was from the get-go.

-I feel like we played a lot of good matches this week, even our first round was really tough.

The Grimleys faced a tricky Malaysian pair in the first round, getting the job done 21-14, 26-24 against Boon Xin Yuan/ Wong Tien Ci. They then surpassed challenges from Indian and English pairs before facing the vastly experienced World Championship medallists Kim Sa Rang/ Kim Gi Jung of Korea.

The final
Malaysia’s Junaidi Arif/ Muhammad Haikal were waiting in the final, the pair that defeated the top seeds and defending champions Adam Hall/ Alexander Dunn in the semifinal. They are also a pair that have collected title wins in 2021 from Austria, Greece and Ukraine.

Despite the odds against them and this being the first International Challenge final that they have been in, the Grimley brothers found a way.

-It was so intense because the Malaysians were up in the first a little bit but getting that first game gave us confidence leading into the second. It was close up to 11 points in the second, and then we pushed on and got a lead. That last point felt that it took forever but we are so glad that we got it in the end.

Scotland is certainly in a healthy position when it comes to men’s doubles and this win will add fuel to propel the fast-improving pair forward.

-It feels amazing to be Scottish Open champions. We can take so much confidence from this week. We went through each round taking it one step at a time. It’s the biggest achievement so far in our career.

WATCH all the matches from the Scottish Open 2021 on www.badmintoneurope.tv