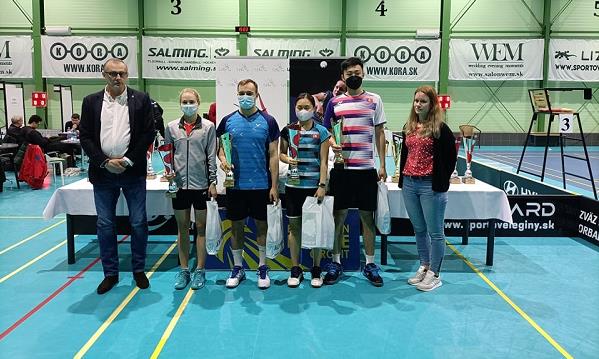 While the last edition saw Chinese Taipei win in four out of five categories, each category was won by a different country this time in Trencin, Slovakia.

The home favourites and Centre of Excellence players fell short of becoming the first Slovak champions since the inaugural 1993 edition. In the women’s singles, top seed Martina Repiska succumbed to the Polish European U17 silver medallist Joanna Podedworny in the second round, and lost in the women’s doubles quarterfinals with Katarina Vargova. While Slovak Milan Dratva and Czech Katerina Tomalova lost their opening encounters against the respective eventual champions.

The lucky Polish pair
Following Fabian Roth’s semifinal loss to Chi Yu Jen, Wiktor Trecki/ Magdalena Swierczynska were the only European athletes to reach the finals. Interestingly, they got a walkover against two Hong Kong China pairs in the quarterfinals as well as the semifinals. The Polish duo finished as runner-ups, losing to Hongkongers Yeung Ming Nok/ Yeung Pui Lam in the final: 21-16, 21-12.

Consecutive title for Lee Chia Hsin
The second women’s doubles semifinal match was declared a “No Match”. Consequently, the winner of the other semifinal would automatically lift the trophy. Partnering with Teng Chun Hsun, Chia Hsin lifted a second consecutive Slovak Open trophy. The Chinese Taipei pair got the better of Yeung Nga Ting/ Yeung Pui Lam in a nail-biter. Losing 21-16, 15-21, 22-20, Pui Lam failed to replicate her mixed doubles victory.

One out of three for Hong Kong China and Chinese Taipei
Both nations had to settle for one win out of three finals. The Malaysians Boon Xin Yuan/ Wong Tien Ci eked past Hongkongers Law Cheuk Him/ Lee Chun Hai Reginald in three gruelling games. They won 21-18, 14-21, 21-19. Lee, former World Championships bronze medallist, returning to the spotlight for his country.

Likewise, in perhaps the most exciting match of the day, the Indian youngster Aditi Bhatt defeated her opponent from Chinese Taipei. Wen Chi Hsu was in control as she won the opener 21-19. However, she let the momentum swing the other way, conceding 21-10. Bhatt capitalized on the small windows of opportunities that showed up. She emerged victorious 25-23 in the decider.

Japan wraps it up
Following the semifinals withdrawals of Riko Gunji and Rui Hirokami/ Yuna Kato, Japan was represented only in men’s singles. However, Riku Hatano did not disappoint. He eased past Yu Jen 21-17, 21-15 to win the crown.