A new tournament is here. Matches are live right now at the YONEX Luxembourg Open 2022.

The European Circuit has welcomed a new event to its calendar. The YONEX Luxembourg Open 2022 kicked off yesterday with a lineup of European and international players that will be competing to become the first ever champions of the event.

Today, the first few matches of the Main Draw have already been played, but there are plenty more to come all throughout the day. Enjoy all the action and find out who will advance onto the next stage by watching on www.badmintoneurope.tv.

Men’s singles
After competing at the Swiss Open and Orléans Masters, top seed Mads Christophersen will be fighting to get its first big result of 2022 in Luxembourg. The player has just secured his first win against Italy’s Giovanni Toti.

Denmark has two more seeded players in the race for the title; Ditlev Jaeger Holm and Magnus Johannesen, who has recently won the title at the Dutch International. Belgium’s Julien Carraggi, who has secured some good results this year, is another player to watch out for.

Women’s singles
Who will be the Luxembourg Open’s first women’s singles champion? The host country’s bid for a medal in the category is the talented Kim Schmidt, who is also playing with doubles partner Zoé Sinico. She will be facing fourth-seeded Tasnim Mir, India, on her opening match of the event. Fellow Indian player Prerana Neeluri, number two seed, will also be a strong opponent.

Hungary’s Daniella Gonda, number one seed, has reached four quarterfinals so far this year both in Europe and in international events. This could be her chance to get her first medal of the year. Ronja Stern, Switzerland, is also one of the seeded players, having participated just last week in the European Championships.

Men’s doubles
Marvin Datko/ Patrick Scheiel were also in Madrid at the European Championships. The top seeded in this event have had a good run this year so far but haven’t made it past quarterfinals, and Luxembourg could be their chance to do so. We don’t know who they will be facing first yet, but they could be meeting another talented German pair, Malik Bourakkadi/ Johannes Pistorious, in quarterfinals.

Denmark will be all in with Andreas Søndergaard/ Jesper Toft, Kristian Kræmer/ Marcus Rindshøj, and Jonas Jæger/ Alexander Pedersen. The latter will be playing their first match against Indonesia´s Muh Putra Erwiansyah/ Patra Harapan Rindorindo, this year’s Stockholm Junior champions.

Women’s doubles
Second seeded Kim Schmidt/ Zoé Sinico are Luxembourg’s strongest players in this category. The pair will either be meeting Annie Lado/ Estelle Van Leeuwen, England, or Aura Ihza Aulia/ Chiara Marvella Handoyo, Indonesia, who were close to getting a medal at the Stockholm Junior last week.

England’s Abbygael Harris/ Hope Warner, who reached this year’s Estonian International quarterfinals, could be in the podium in Luxembourg, and Norway’s Marie Christensen/ Aimee Hong, who reached Round of 16 at the 2022 European Championships, could also pose a threat for the other seeded duos.

Mixed doubles
The seeded list of this category presents some interesting potential contenders to the title, with a varied mix of European talents. Germany’s Patrick Scheiel/ Franziska Volkmann top the list and have just secured their first win at the event against Alex Green/ Estelle van Leeuwen, meaning that they’re just one step away from a medal, facing Indonesia’s Muh Putra Erwiansyah/ Puspa Rosalia Damayanti next in the quarterfinals. 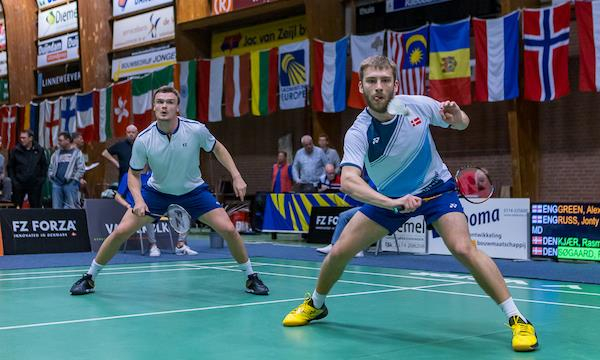