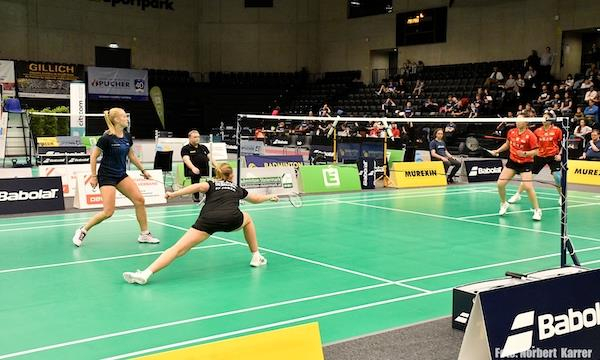 Denmark wins three silvers and Europe comes out successful in women’s doubles in an event where, similarly to the Slovenia International, Chinese Taipei took over the podiums.

Chinese Taipei are showing everyone that they are at the top of their game in the European Circuit. After obtaining some great results at the I FEEL SLOVENIA YONEX International last week, the Asian nation enjoyed yet another successful event on European soil, this time in Austria. Still, there were many wins for other nations to celebrate at the Austrian Open 2022.

Denmark strikes again
Magnus Johannesen strikes again in what has been a great tournament for the young Danish talent. The twenty-year-old player faced Austria’s home star Luka Wraber on Friday for his first match at the event. He sealed the deal in straight games ADIDAS Alpes International U19 Champion Alwi Farhan, Indonesia, and two Chinese Taipei players that did not make it easy for the Dane in two hour-long matches.

Waiting for Johannesen at the finish line was Swedish Open 2022 runner-up Yeoh Seng Zoe, Malaysia. The Dane could not get the win and therefore took home the silver, a great addition to the two champion titles that he has earned so far this year. William Kryger Boe/ Christian Faust Kjaer are two other young Danish players to watch out for.

The pair impressed with notable victories last year both in the European circuit and at the Junior events. Just like recently in Slovenia, where they reached the semifinals, Austrian Open has also served them to show what they got on an international stage. Boe/ Kjaer have finished runner-ups in this tournament, and it will be interesting to see what else they will achieve in the remaining of the year.

A successful women’s doubles for Europe
That’s two silver medals for Denmark, and Julie Finne-Ipsen/ Mai Surrow would get them the third one. The top seeded pair hadn’t had the opportunity to show their full strength this year, having only participated in the Swedish Open, but the pair have show that they are back as they finish as runner-ups in Austria. Mai Surrow had already won a gold in 2017, but with her then mixed doubles partner Mikkel Mikkelsen.

Fourth seeded Annabella Jaeger/ Leona Michalski won a bronze in the women’s doubles category. The German duo were stopped by Finne-Ipsen/ Surrow in the semifinal, with the other only match that they played being against Czech Republic’s Lucie Krulová/ Petra Maixnerová.

The other bronze medal went to Scotland’s Rachel Andrew/ Sarah Sidebottom. The Scots have done well in the tournaments they’ve played this year and in Austria they were also ready to fight, earning a third/fourth spot on the podium after losing the semifinal to champions Lee Chia Hsin/ Teng Chun Hsun.

Andrew was close to winning another medal in mixed doubles together with Adam Pringle, if it hadn’t been for England’s Ethan Van Leeuwen/ Chloe Birch. The English pair booked a spot in the semifinals with their win against the Scottish, eventually losing to Chinese Taipei’s Ye Hong Wei/ lee Chia Hsin.

The other mixed doubles medal went to France’s Lucas Corvee/ Sharone Bauer. This was not Corvee’s first at the Austrian Open, as he secured the men’s doubles silver with Ronan Labar last year. The recently crowned Luxembourg Open champions got past Slovenia International runner-ups Rafli Ramanda/ Az-Azahra Putri Dania, Indonesia but fell to Chang Ching Hui/ Su Li Wei in the semifinals.