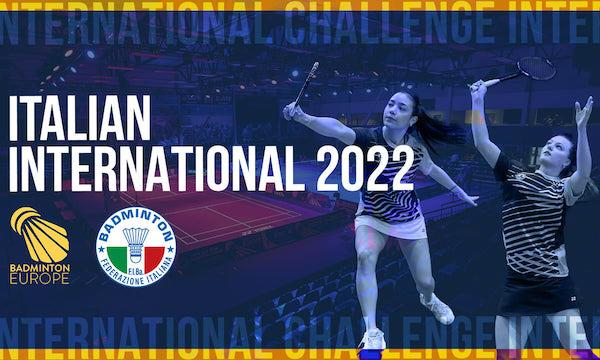 With the qualification rounds underway and a line-up with some of Europe’s top talents, the Italian International 2022 will be bringing plenty of action for this weekend.

As many players get ready for the busy weeks ahead both in Asia and Europe, the city of Milan in Italy is hosting from today until 5 June the 21st edition of the Italian International. The qualification round has started this morning and is still being played, while the main draw will begin tomorrow. These are some of the players you can expect to see battling on court.

Men’s singles
The two-time Italian International champion is here to take his third title. Having made his last appearance at the European Championships that were played in his home country, Pablo Abian will be playing his first match against Kim Bruun, who will not be Denmark’s only player to fight in Milan.

This year’s Korea Open semifinalist Victor Svendsen and the Luxembourg Open 2022 champion Mads Christophersen will also be there. Felix Burestedt, top seeded Ygor Coelho, Mass Weisskirchen and wild card Fabio Caponio are some of the other names we’ll see playing from tomorrow.

It remains to be seen who Jordan Hart, fifth seeded, will be facing first, while Polina Buhrova will be playing against Wen Chi Hsu, who has just won the Austrian Open last week. Another one of the host’s wild cards went to Yasmine Hamza who competed in the European Championships and will have to get past third seeded Yaelle Hoyaux if she wants to make it to the next round.

Men’s doubles
The top seeded pair, Callum Hemming/ Steven Stallwood will have no easy first opponents, as they will be facing Rasmus Kjær/ Frederik Søgaard, who this year have already won two golds in the European Circuit — in the Dutch International and Polish Open.

Last year’s champions Stine Kuespert/ Emma Moszczynski will not be there to defend their title, so this could be the 2021 silver medallists Annabella Jaeger/ Leona Michalski’s chances to get their hands on the gold. Chloe Birch/ Jessica Pugh could be also adding another good result to their new partnership.

Mixed doubles
From the 2021 podium, reigning champions Jesper Toft/ Clara Graversen, runner-ups Rory Easton/ Annie Lado, and bronze medallists Mihajlo Tomic/ Andjela Vitman will all be in Milan to repeat last year’s great results. It will not be easy, as there is plenty of strong international pairs with their eyes on the prize.

2022 European Championships bronze medallists Mikkel Mikkelsen/ Rikke Søby could also be Denmark’s chance at a medal, and Italy’s Martina Corsini will be partnering with France’s Julien Maio to compete at the tournament.