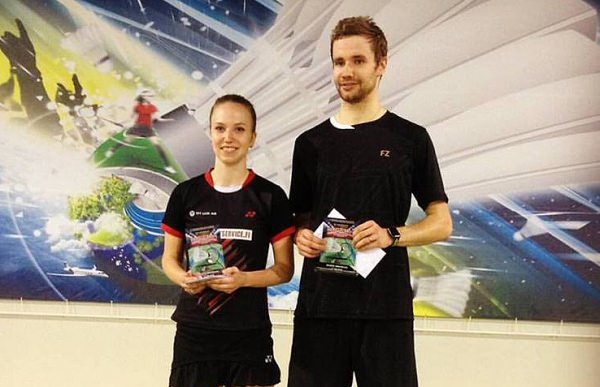 Jenny Nystrom and Anton Kaisti are rapidly establishing themselves as one of the most prolific mixed doubles pairs on the Badminton Europe circuit. The Finn’s notched up their 5th title together as a pair today claiming the Portuguese International title beating emerging French pair Delrue and Gicquel in the final.

The Finns came into this week’s tournament as third seeds but finding themselves on the same side of the draw as top seeds and the inform Mikkel Mikkelsen and Mai Surrow were outsiders to lift the title.

Nystrom and Kaisti got the better of the Danes in the semi-final 27-25 in the deciding set and with that win walked on courts in today’s finals as favourites against Thom Gicquel and Delphine Delrue, the young French who are preparing for the European Junior championships next month in Mulhouse.

The young French raced out of the blocks and the Finnish pair were forced to play catch up badminton for most of the first set before losing out 21-19. In the second game Nystrom and Kaisti were behind for most set and only managed to get their noses in front to lead 19-18.

Their experience took them over the line in that second game 21-19 and with the momentum on their side took a healthy lead in the deciding set before claiming the title with a 21-12 deciding game win.

“It is always nice to win but this one feels even better as we didn’t start so well in today’s final and we were behind all the way until very late in the second game” said Nystrom to Badminton Europe. “We had a break for three years as a pair and since we started playing again together we have won 3 tournaments. Next step for us is to win and International Challenge tournament.”

Subhankar Dey gets revenge on Svendsen

Today’s men’s singles finalists met just last week in the Austrian Open in Vienna and on that occasion Denmark’s Victor Svendsen got the better of Subhankar Dey. In today’s final in Caldas Da Rainha the Indian overturned that defeat and landed his second International Series tournament of 2017 after his victory in Iceland in January.

In the opening game the Dane squandered a 19-16 lead to let the Indian in to steal a march 21-19. In the second set there was never more than 3 points between the players but at 18-18 the Indian once again showed the greatest composure to take the title 21-19.

As expected Japan walked away with a hat trick of titles as the hot favourite and former world number 11 Sayaka Takahashi won the women’s singles title. In the women’s doubles Chisato Hoshi & Naru Shinoya cruised to the title against Surrow and Moller and the Japanese rounded off a good week taking the men’s doubles as Kazuaki Oshima & Yuta Yamasaki breezed past the Danish challenge of Olesen & Estrup.