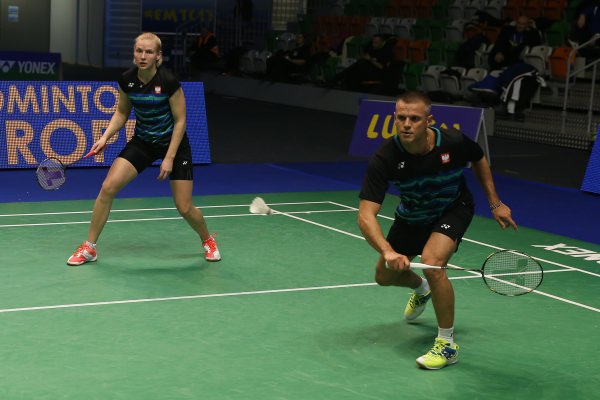 There is no doubt about it that when it comes to Polish Badminton and international success there has been none more successful than Robert Mateusiak & Nadia Zieba. The Poles quite rightly obtained legendary status in Poland after winning the European Championships in 2012 and continue to defy time as they hunt for their 8th home mixed doubles title this week in Warsaw.

Mateusiak & Zieba won four in a row between 2005 and 2008 and added titles in 2011 & 2013 and return this year to defend their 2016 crown. The Poles are top seeds entering this week’s competition and their biggest challenge is likely to come from the travelling Malaysian and Chinese Taipei teams.

The Poles will however need to be on their toes from the start as a likely meeting with Bay-Smidt and Boje in the second round will have a bite to it. The Danish young guns, winners of the Prague Open 2016, will be out to recapture some of that form that took then to the Prague title back in September.

Poland will also look to Pawel Pietryja and Aneta Wojtkowska to back up their more illustrious compatriots. The young pair have improved with every tournament this past year and showed their senior capabilities in the recent European mixed team championships in Lubin.

As is tradition Poland will also look to their men’s doubles pairs to go deep into the competition. Bochat & Cwalina are still looking to make that big break through as a top circuit pair and creeping in under the radar are Moren and Szkudlarcsyk. A second round match against Bay-Smidt and Sogaard will tell a lot of the Poles form.

After an enforced layoff post Rio Scotland’s Kirsty Gilmour (pictured above) bounced back onto the circuit with confidence boosting win in Austria the week before the All England. Gilmour travels to Warsaw this week to continue her comeback with her injury now firmly behind her.

The Scot will be the one to beat for sure even with a host of Asians in the draw with Bulgaria’s Mariya Mitsova one to watch from a European perspective in the top half of the draw.

Scotland will look to do a singles double with Kieran Merrilees the top seed in the men’s singles draw. But with a host of Asians in the draw as well as Indra Bagus Ade Chandra in the top half of the draw Merrilees will need to have his ‘A’ game packed for the trip to Poland.

Mitsova and Nedelcheva hunt their 5th title in 12 months in the women’s doubles. The Bulgarians have contested 7 finals this past year but have only won one International Challenge they competed in which was in Hungary. The Bulgarians lost finals in Italy and Prague in the second half of 2016 and a while prolific on the circuit will certainly feel a hat full of challenge wins is needed in 2017 to push themselves inside the world’s top 25.

All the action kicks off in Warsaw on Thursday with qualification rounds. To view the full draws from the 2017 Polish Open click HERE

To view previous winners of the Polish Open click HERE