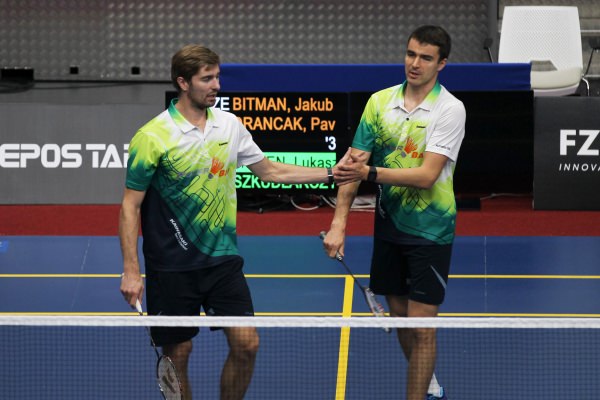 Moren & Szkudlarczyk (pictured above) have forever lived in the shadow of more illustrious Polish men’s doubles pairs such as Cwalina & Wacha and Cwalina and Logosz with both pairs making the Olympics in London & Rio. Their quality however has never been in doubt and this week in Warsaw they proved there are still a lot of miles left in their aging legs.

The Poles form was verified as early as the second round where they beat Danes Bay-Smidt and Sogaard in three games. Another 3 games quarter final win over second seeded Taipei shuttler Po and Yang reaffirmed their form and marked them out as the ones to beat at the business end of the tournament.

Today’s final victory came a lot easier than expected as they beat Adam Hall and Alexander Dunn in two games in what itself was an excellent result for the new Scottish pairing. Hall’s partnership with Peter Mills has been cut short due to funding as the Scot now embarks on life after the GB set up in Milton Keynes.

In the mixed doubles Mateusiak and Zieba cruised through the opening rounds but found themselves a set down in today’s final against Tseng Min Hao and Ling Fang Hu of Taipei. The Poles let game point slip in the opening game to lose 22-20.

Mateusiak and Zieba reversed the first set score line in the second game and with momentum on their side went on to win the third set 21-13 to lift an unprecedented 8th title.

There was no European presence in the women’s doubles and both singles events with hot women’s singles favourite Kirsty Gilmour going down early in the tournament.

Yui Hashimoto lifted the womens singles title after a good showing in Austria a few weeks back. Jai Wei Tan lifted the men’s singles title. Poland proving to be a happy hunting ground for the Malaysian. The women’s doubles went to Indonesia’s Barkah and Sahputri with four of the final finals going the distance to three games.

For all results from today’s Polish Open finals click HERE