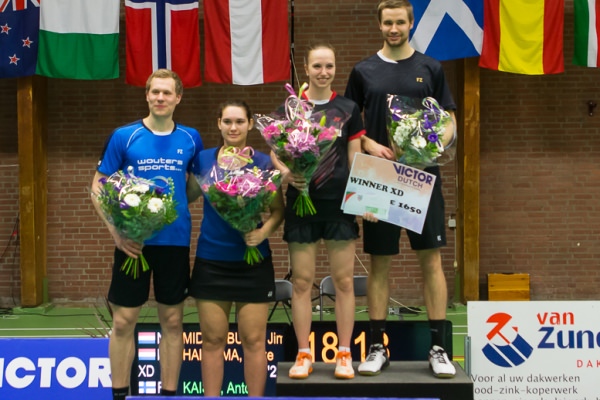 They say in sport that winning is a habit. That is certainly the case for Finnish duo Jenny Nystrom and Anton Kaisti who lifted the Dutch international mixed doubles title this afternoon for their 6 victory from 6 final appearances.

The Finns have been cleaning up International Series titles on the Badminton Europe circuit over the past year and today’s win represents their fourth success together after coming back as a pair after a three year hiatus.

The Finnish duo were always one of the pairs to beat this week from their position as third seeds and lifted the title in the most emphatic way without dropping a set. Today’s final opponents were local Dutch pair and local hall and club favourites Jim Middelburg and Myke Halkema.

The Finns raced into a 3-0 lead in the opening game at the Dutch were never to recover from that early deficit with Nystrom and Kaisti taking the opening game 21-18. The Dutch will rue missed opportunities in the second game as the let a 12-7 & 16-14 lead slip. Nystrom & Kaisti took the title with a 21-18 second set win and now head to Kolding for the European Champions where former European Champions Mateusiak & Zieba will most likely be their second round opponents. 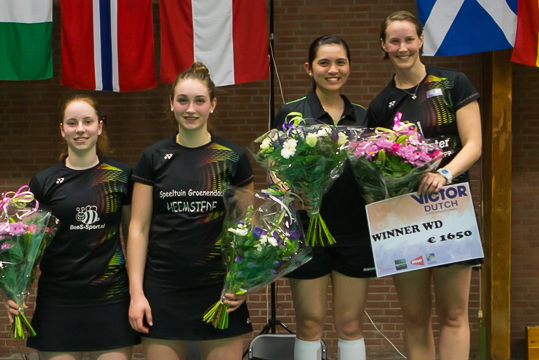 No joy for home athletes on finals day

The defeat of Middleburg and Halkema set the tone for the home Dutch athletes performance on finals day in Wateringen as all three finals with home representation failed to produce a home winner. Middleburg took to the courts in the men’s doubles final also alongside Russel Muns and came agonisingly close to home success just losing out in three sets 24-22 in the decider to Australian/Danish combo of Leydon-Davis & Molhede.

Debora Jille and Imke Van Der Aar were looking to put the disappointment of the European Juniors behind them in the women’s doubles. The young Dutch were up against the vast experience of Birgit Overzier & Cisita Jansen in today’s final with the Germans calling on their vast experience to win in two 21-18 21-18.

Disappointment for the young Dutch but on refection they will be very happy with their weeks work as they grow into senior life and become one of the feared pairs on the women’s doubles circuit.

In the singles finals Finland’s Kalle Koljonen came very close to upsetting the odds against Anand Pawar. The Indian was last seen in Europe at the Irish Open back in December 2016 where he picked up a back injury. Today the veteran re-emerged on the circuit and proved is class once again to get his season back on track with a three set victory.

Irina Andersen had showed some good for in Mulhouse last week picking up bronze in the European Juniors. Today the Dane reaffirmed that form to claim the Dutch title beating Luise Heim of Germany. The German, after winning the opening game, had match point in the second set but the calm demeanour of Andersen got her over the line in the second set 24-22 and with the momentum on her side took the title with a 211-18 win in the decider.