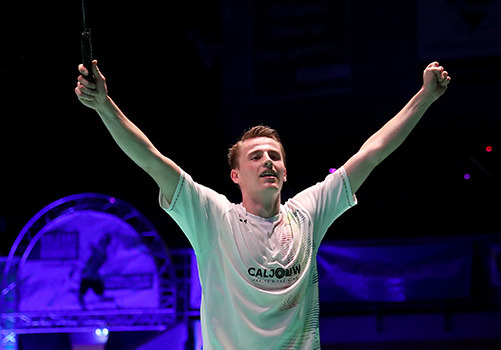 The 6th edition of the Orleans International concluded this afternoon with Europe winning three of the five finals with Dutchman Mark Caljouw coming of age with a career defining challenge success.

Caljouw had notched up some decent individual match results in 2017 but this week managed to put a run of five excellent performances together to lift one of the big International Challenge titles on the Badminton Europe circuit.

Caljouw took down old foe and one of the players of the season Fabian Roth in the quarter final before toppling the number 1 seed Tien Minh Nhuyen in the semi-final with a 21-8 21-8 thrashing. In today’s final the Dutchman put an end to the dream of a French men’s singles winner beating Lucas Corvee in three games. Caljouw took the opening game 21-8 before Corvee levelled with a 21-18 win in the second. But Caljouw, brimming with his new found confidence, stormed into a 13-4 lead in the deciding set a lead he would go on to hold and win 21-11 in the third set.

Corvee’s defeat was a real blow to French hopes and the final nail in the coffin came in the women’s doubles as Lea Palermo & Delphine Delrue also let slip the opportunity to becomes the home nations first winner of the tournament loosing in three games to Japan’s Kugo and Yokoyama.

Scotland’s Kirsty Gilmour won her second tournament of the year adding the Orleans International women’s singles title to the Austrian title she won a few weeks ago. Gilmour, who plays her club badminton in France, has always been a big favourite of the French fans and produced the goods in today’s final to consign Malaysia’s Ying Yinh Lee to her second runners up spot in consecutive weeks.

“It has been a tough week but managed to get another title in the bag. Always love playing in France” said Gilmour via her facebook page.

German’s continue their rise to the top

A series of consistent performances has pushed Mark Lamsfuss and Isabel Herttrich (pictured above en-route to the title in Orleans) insides the world’s top 30 in mixed doubles. The German duo are certainly a pair to watch out for in the future and today they proved that pedigree lifting the Orleans International beating Chang & Chang of Taipei in two convincing games.

The Germans had a series of good three set wins in the quarter and semi-finals but left nothing to chance today as they blasted out of the blocks taking the first set 21-9. In the second games Chang and Chang brought the fight to the Germans and at 16-15 they had their chance to take the match to a deciding set.

The young Germans, who look set to take over the mantle as top German pair from Fuchs & Overzier, were not about to let this golden opportunity pass and rattled off 5 points without reply to win the game and with it the 2017 Orleans International title.

There was some consolation for Taipei as Liao Min Chun & Cheng Heng Su beat Indonesia’s Haryanto and Isfahani to claim the men’s doubles title.

For all results from the 2017 Orleans International finals click HERE