Europe had always had its back to the wall coming into this edition of the Finnish Open. The travelling Asian teams from Malaysia, Chinese Taipei and Japan had featured heavily over the past few weeks on the circuit and today in Vantaa they brushed aside the majority of the remaining European’s except for a small handful of Danes.

The Finnish dream ended when Airi Mikkela and Kalle Koljonen went out in the quarter finals and Eetu Heino’s brave fight ended in the semi-final. Others to fall by the wayside were top seeded men’s doubles pair Colberg & Fladberg as well as Dahl, Bruun and the Scottish contingent of Carder, MacHugh and Campbell. It was turning out to be a disastrous day for Europe’s athletes.

Rasmus Gemke (pictured above) stopped the rot to get Europe’s first representation into the finals. The Dane has looked in top shape this week and his win over Tien Minh Nguyen, the former world number 5, was a good indication of his form early in the tournament.

In today’s semi-final Gemke was too hot for fellow Dane Kim Bruun controlling both games to take the match 21-9 21-16. Gemke looks to have mastered his on court emotions and coupled with his undoubted talent is starting to emerge from the shadows of his more illustrious clubmate Anders Antonsen.

The Dane will fancy his chances against Yu Igarashi in tomorrow’s showdown as the Japanese stuttered a bit in his win over Eetu Heino. 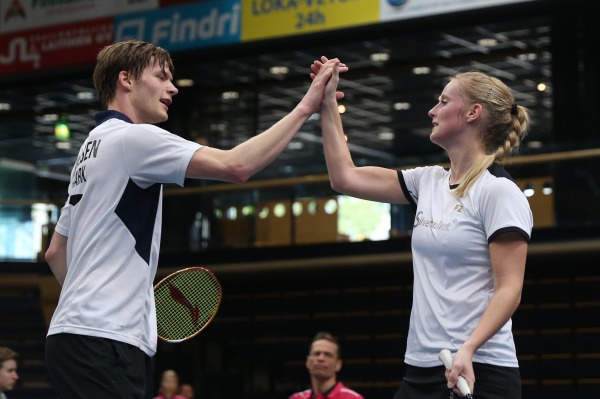 In the final match of the day Mikkel Mikkelsen and Mai Surrow (pictured above) continued to prove their worth as an emerging top pair as the essentially flew solo all week in the battle of Europe versus Asia. Chemistry runs through the core of the partnership and their victory over top seeds Chang & Chang will see the Danes as favourites for the title tomorrow.

Other than the Danish semi-final success it was a bleak day from a European perspective as Japan were the big winners filling all positions in both the women’s singles and women’s doubles finals while the men’s doubles final will be a Taipei V Japan shootout as Liao & Su, the winners from Orleans last week, face off against Gondo & Watanabe. The Japanese trailed Po & Yang from Taipei 19-14 in the deciding game of their semi-final but managed to fight back to win 22-20 to prevent an all Taipei final.