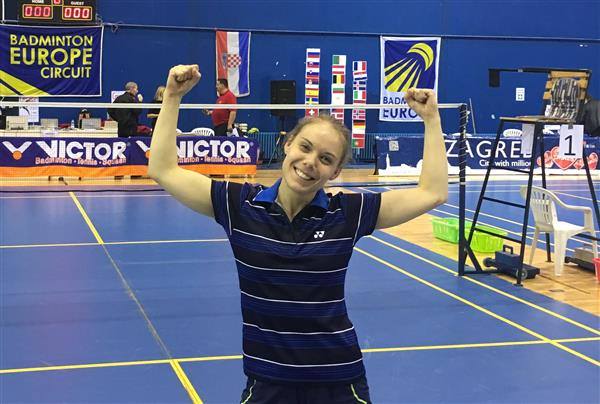 The Croatian International concluded yesterday in Zagreb with Ann Hald turning back the hands of time to lift the women’s singles title while pre-tournament favourite Kasper Lehikoinen defeated home hero Zvonimir Durkinjak to add to his growing collection of circuit titles.

Hald (pictured above) who has been in and out of the game with injury over the past years would have certainly looked at the draw in Croatia this week and felt a win was on the cards. After all in 2009 she did claim the European Junior title and while form may be temporary, talent is not.

Hald came through the top half of the draw unseeded and her three set win over Katerina Tomalova was an indication of the Danes form heading into the final against England’s Georgina Bland. After a close opening game which the Dane closed out 22-20 she went on to win the title with a 21-18 second set success.

Hald completed a decent week in Zagreb taking silver in the women’s doubles losing out to top seeds Kuuba & Ruutel who won their first title 0f 2017.

“Winner of Croatia International 2017 in WS. It feels so great. Furthermore a 2nd place in WD with my partner Lisa Kramer-Jessen is amazing too. It was our first international tournament together and making this results gives us a lot of motivation for more. What a week in Zagreb.” Ann Hald via her Facebook page.

Lehikoinen’s success in the men’s singles was a little bit more predictable. The Finn was effectively in a two horse race for the title against local favourite Zvonimir Durkinjak. Both players were the quality in the field and both reached the final without dropping a set. Lehikoinen kept that run going in the final beating the Croat in two games 21-14 21-16.

Durkinjak did get to climb the top step of the podium winning the men’s doubles with Zvonimir Hoelbling while England’s Matthew Clare and Victoria Williams claimed the mixed doubles crown.

For all results from the Victor Croatian International click HERE