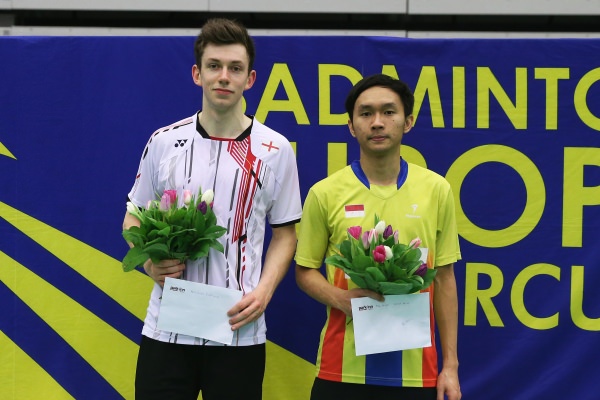 A week ago Toby Penty was trying to figure out how he let two match points slip to lose the Estonian International final. Fast forward seven days and the Englishman leaves Sweden as their international champion proving perseverance and persistence pays off.

To date Penty had lost all 6 previous finals in his international career but today the Englishman stormed to the Swedish title beating Wibobo Setyaldi Putra in two relatively easing games. Penty got off to a magical start racing into a 12-3 lead and the English powered home to take the opening set 21-12.

The Indonesian did come out of the blocks fighting in the second set and led 4-1 but Penty was not about to slip up on this occasion and went on to lead at the interval 11-6. The Indonesian only managed another 3 points in the game with Penty lifting the title with a 21-11 second game victory.

“It is a relief to get this one over the line” said Penty “Even loosing last week I felt good and knew the game was in a good place. This week I knew I’d be one of the ones everyone else wanted to beat but in today’s final I felt really great and in control. He (Putra) was tired, I could see that clearly, he had some long matches but to win is great given all the uncertainty recently.”

In the women’s singles Mia Blichfeldt did what she had been threatening for the last few months, win a tournament. The Dane has had some unlucky losses in big matches the last few months and in today’s final she came through against friend and training partner Sofie Holmboe Dahl.

“It’s always tough to play your friend in a final but to win is great as I have come close to finals the last few tournaments” said Blichfeldt in her post match interview. 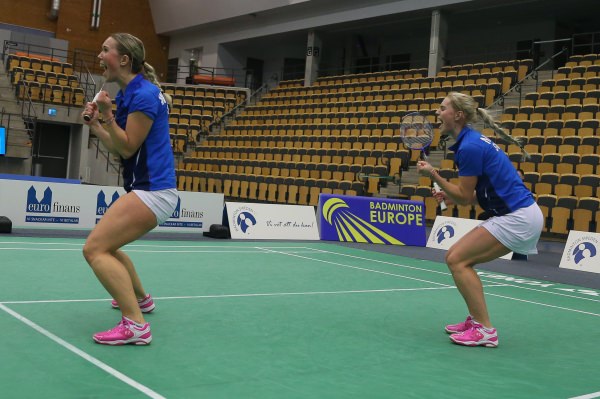 Emma Wengberg, who has lost in three previous finals in Sweden, claimed the women’s doubles title alongside Clara Nistad to give the home nation their only success on finals day. The Swedes (pictured at match point above) came through in one of the tightest matches of the day seeing off Danish duo Boje & Grebak in two tight games.

“I have lost enough times to really enjoy this victory” said Wengberg. “There was a big release of emotion at the end as it was tough out there and a tough tournament to win”

There was double disappointment for Alexandra Boje as the young Dane also went down in the mixed doubles final alongside Mathias Bay-Smidt. One of the players of the week MIkkel Mikkelsen and his partner Mai Surrow pretty much dominated the final and were deserving winners after an excellent week’s work.

In the men’s doubles Russian duo Zinchenko & Abramov ended the doubles dream of home success beating Ruponen and Eidestedt in two games to bag their first title. The Russians took an easy opening game but the let the Swedes back into the match late in the second game after squandering 4 match points.

The Russians settled and took the title 22-20 in the second game leaving the Swedes wondering what could have been.

For results from the Swedish International finals click HERE