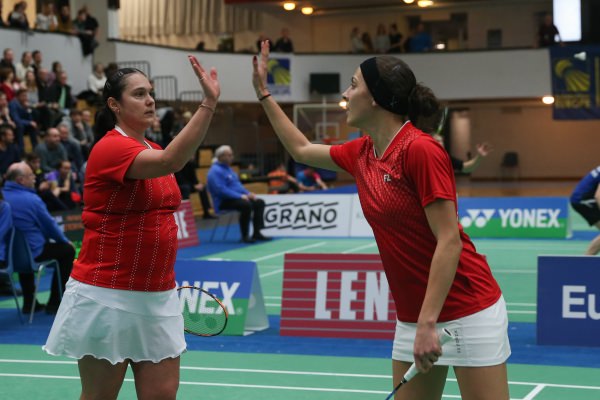 After coming together last year as a partnership Petya Nedelcheva and Mariya Mitsova spent most of 2016 at the pointy end of tournaments. Three wins and three runners up spots was a decent return for year 1 and the Bulgarians have started 2017 just as they left off in 2016 in yet another final.

After a round 1 scare, where they lost a set to Ukrainian pair Lesnaya & Samarchants, the Bulgarians have pushed on to dominate the tournament and are one win away from yet another title. In today’s semi-final the Bulgarian duo ended the run of home pair and 2016 finalists Kristin Kuuba and Helina Ruutel with the Estonians never able to break down the defence of Nedelcheva and Mitsova.

“We came here expecting to play a final and we are there. For years I have been looking for a women’s doubles partner and now with Mariya we are winning tournaments and the big goal for us is a medal at the European Championships in April” said Nedelcheva after their semi-final win.

The Bulgarians will play French pair Delphine Delrue & Lea Palermo in tomorrow’s final after the French saved three match points in a three-set thriller against Bolotova & Davletova for Russia.

Russian’s come out on top in battle of European juniors

One of the more interesting semi-finals today in Tallinn was the all junior matchup between Davletova/Alimov (RUS) and Delrue/Gicquel (FRA). Both pairs are fancied medallists come the European U19 championships in a few months and it was the Russians who walked away with the bragging rights after a close semi-final win.

Indeed, both pairs look the real deal for their respective countries moving forward but it’s the Russians who take their place in the final after a third set 21-18 win.

It will be an all Russian mixed final after Yartzev and Kosetkaya breezed past a misfiring Bastian Kersaudy and Lea Palermo. The French looked out of place today and the Russians eased into the final with a two set win.

Finnish pair Henri Aarnio & Ilka Heino have flown under the radar this week and from nowhere have found themselves in the men’s doubles final after a three game win over Swedish based Indonesian Hermansyah & Gustav Stromvall.

The Finns will face off against French duo Kersaudy and Maio in the final after the third seeds came through in three games against compatriots Gicquel and Corvee. 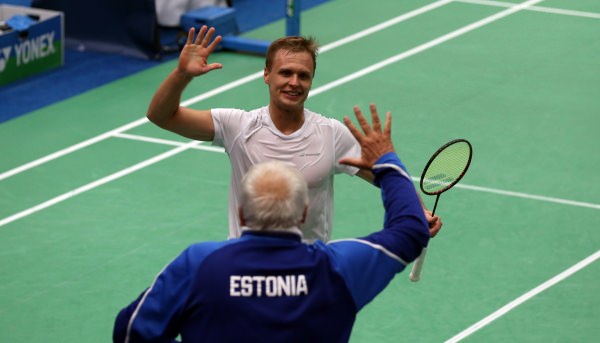 The large home crowd got exactly what they needed today thanks to the efforts of Raul Must. The Estonian number 1 came through a daunting three set quarter final before saving 4 game points in the second set of his semi-final against Erik Meijs to make the final on his home court.

Must had taken the opening game easily against the Dutchman. Meijs bounced back to lead 13-8 and 20-16 in the second and looked to be heading to a deciding set. However, the home hero was in no humour for a second three set match in one day and rattled off 6 consecutive points to take the match and make the final.

For all results from today’s semi finals click HERE

Article and live images by Mark Phelan for Badminton Europe