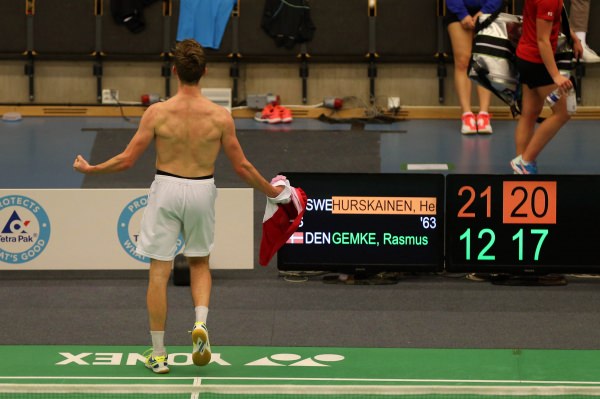 Denmark’s Rasmus Gemke caused the biggest upset of the day at the Swedish International beating top seed Henri Hurskainen in three games after saving 4 match points. The Dane looked dead and buried as the Swede dominate the opening game and 90% of the second with Hurskainen holding four match points at 20-16.

Like a sign from above the internet in the arena failed and all scoring and screens froze but it was the Dane who held his nerve to battle back and win the second game 22-20 and the match. Gemke went on to take the match 21-18 in the deciding set to send the tournament favourite packing.

Mattias Borg fared better from a Swedish perspective, just as he has done in the last few years on home soil. Borg beat Toma Junior Popov to book his quarter final spot and will now play Hermansyah for a place in the semi-final.

Toby Penty continued his good form from Estonia last week making yet another quarter final. The Englishman beat Rasmus Messerschmidt in a close three games in the second round. Penty will need to take it up a gear in tomorrow’s quarter final as waiting for him is number two seed Kim Bruun after the Dane beat French qualifier Arnaud Merkle.

As expected Denmark dominate the women’s singles draw with 5 women through to the last eight. Top seed Mia Blichfeldt was made struggle against Agnes Korosi in three games before finding another gear in the deciding set. Joining her are Julie Dawall Jackobsen, Iben Bergstein, Sophie Holmboe Dahl and the European U17 champion Line Christophersen who beat Julie Finne-Ipsen in round two. 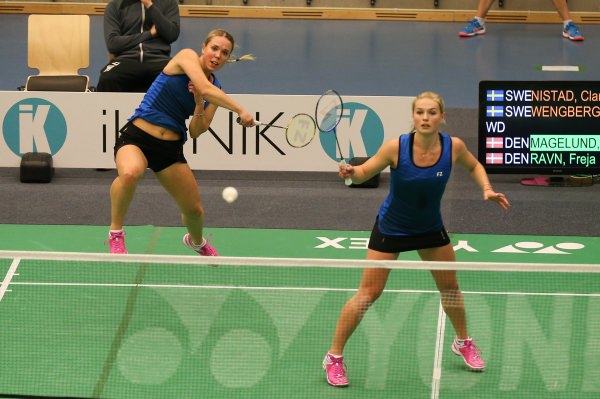 As Hurskainen fell the burden of expectation fell on some of Sweden’s other heavy hitters to bring a smile back to the home supporters. Emma Wengberg and Clara Nistad (pictured above) were pushed hard by Danish young guns Ravn & Magelund before coming through in three sets and not long after Nico Ruponen and Richard Eidestedt booked their quarter final spot beating Corvee & Gicquel in the men’s doubles.

Swedish stars of the future Emma Karlsson & Johanna Magnusson followed suit late in the day with an easy round two win in the women’s doubles draw to put a better complexion on the draw from a Swedish perspective after the Hurskainen disappointment.

Nico Ruponen and Amanda Hogstrom were probably the most comfortable Swedish top seed on day two as they were untested in their second round match against Irina Amalie Andersen and Philip Seerup. The Swedes were in cruise mode coming through in two games and set up a mouth-watering quarter final match versus Mathias Bay-Smidt and Alexandra Boje of Denmark.

For all results from day two in Lund click HERE