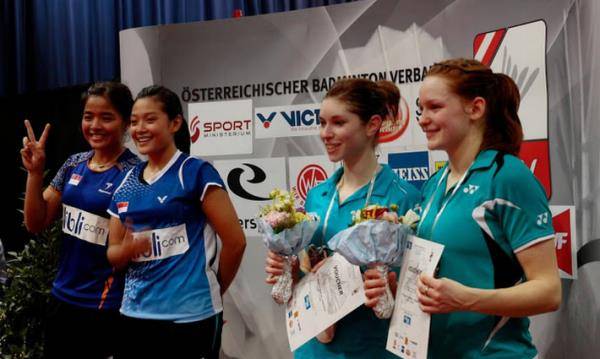 The finals day of the Austrian Open in the Wiener “Stadthalle” saw three European participants fighting for the titles and a show match between 5-time European Champion Peter Gade and Austria’s Michael Lahnsteiner. However, in the end all champions of the International Challenge tournament (15.000 Dollars) in the Austrian capital are coming from Asia — three from Indonesia and two from Hong Kong.

In the women’s singles finals, unseeded Cheung Ngan Yi (HKG) won against the number two of the tournament Linda Zetchiri of Bulgaria 21:16 and 21:8.

In the men’s doubles, Indonesian duo of Fajar Alfian/Muhammad Rian Ardianto [8] thanks to a 23:21, 12:21 and 21:19 victory over Peter Briggs and Tom Wolfenden (ENG) prevented a European triumph at this year’s Austrian Open.

Alongside the finals of the Austrian Open, an exhibition between the former world number one Peter Gade from Denmark and former Austrian number one Michael Lahnsteiner took place. The large crowd was fascinated. With this match the Austrian finished his international badminton career. Gade won 11:4, 11:10, 9:11 and 11:10. “Even if it was only an exhibition, we both tried to show that we will do our best”, says Gade.

“Peter Gade has always been my idol. When I started playing badminton, he was the one, you had to know. It’s great to finish my career by playing Peter”, Says Lahnsteiner.