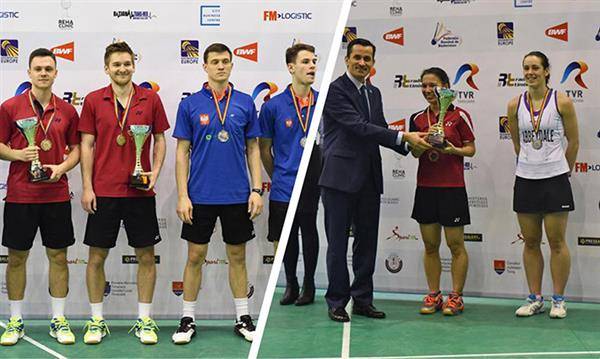 In the afternoon of the 15th of March the 2015 Romanian International came to an end. Four out of the five finals were decided in only three games and just one in four games. Shorter in one way, but on the other hand there were some surprises.

The day started with the singles’ finals. In the men’s event the number one seed, Italy’s Indra Bagus Ade Chandra lost 12-10, 11-6, 11-9 to Adi Pratama of Indonesia. At the same time, but on another court, Lianne Tan of Belgium, hot favorite in the women’s singles, defeated Chloe Birch 11-7, 11-7, 12-10. The English player did reach the final without being one of the seeded players.

The mixed doubles finals saw the Indians Tarun Kona and Sikky Reddy met German-Indonesian duo Jones Rafli and Cisita Joity Jansen. It took the Indian players 25 minutes to win 11-7, 11-8, 11-4. Both men’s and women’s doubles finals were again played simultaneously like the singles events. The men’s doubles category one was the only one where the number one and two seeds of the tournament actually made it into the finals. Zvonimir Durkinjak and Zvonimir Hoelbling of Croatia, last year’s winners, retained their title as they won 11-9, 11-8, 11-7 over the Polish couple Milosz Bochat/Pawel Pietryja.

England’s Chloe Birch left the Romanian city of Timisoara with great satisfaction as she grabbed the women’s doubles title to with her compatriot Jenny Wallwork, 11-6, 14-12, 8-11, 11-8 against the French pair Lea Palermo and Anne Tran, fourth seeded in this event.