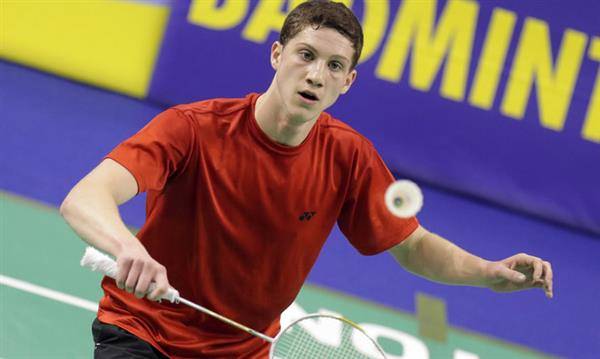 Ukraine was the big winner of the 4th Hatzor international with having won three gold medals in the Badminton Europe Circuit event. The tournament offered a total prize money of 5.000 US Dollars. Gennadiy Natarov and Yulia Kazarinova started the finals day with a victory in the mixed doubles category over Florent Riancho from France and Kate Foo Kune of Mauritius.

It took some time for Kune and Riancho to get into the match after the Ukrainians won the first two games 11-6 and 11-7. But even after Kune and Riancho took the third (11-8) to make it 1-2, and came to 10-10 in the 4th set, it was Kazarinova and Natarov who succeeded and took the last and deciding point of the match.

The celebrations of Natarov in Israel continued in the men’s doubles with partner Artem Pochtarev, in a final which gave the hosts the chance of winning a first and an historic gold medal in Hatzor. Alexander Bass and Lior Kroitor of Israel came back from 5-11 in the first game, to lead in the next two games and reach the dramatic score of 10-10. In the end, Kroitor and Bass suffered from their lack of experience, and Natarov and Pochtarev knew how to stay calm and won 11-10 both games; 3-0 after 25 minutes.

It was the second gold as well for Artem Pochtarev, who won gold in the singles after top seed Blagovest Kisyov of Bulgaria (1) retired. Portugal took the women’s singles crown, the only gold medal which wasn’t won by Ukraine. It was Telma Santos who retained her title after only 19 minutes of play by winning in three straight games against Dorotea Sutara of Croatia.

Click here for full results of the 2014 Hatzor International