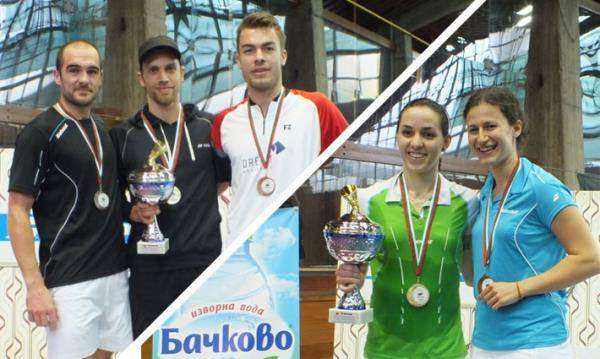 The local hopes for success at the 2014 Babolat Bulgarian International (15.000 US Dollars) were dashed as Bulgarian player Linda Zetchiri lost her semi-final against Indonesian ace Maria Febe Kusumastuti 21-13, 3-21, 13-21. European Junior Champion and BEC Best Young European Player of the Year 2013 Stefani Stoeva withdrew from the women’s singles competition as well as Petya Nedelcheva, who withdrew before the tournament.

The final of the women’s doubles saw a class match from two Indonesian pairs. Destiara Della Harris and Gebiya Ristiyani Imauan versus Ririn Amelia and Komala Dewi. Harris/Imauan were the luckier players in this close final (21-9, 18-21, 21-18).

In the men’s singles final, it was German Marc Zwiebler who had no difficulties against Scott Evans of Ireland as he won 21-15, 21-8. Zwiebler now held a 6-0 head-to-head career record against Scott Evans. The former European Champion (2012) already won last week’s Czech International in Prague.

Yyeeeessssss… CHAMPION!!! 2nd title in a row 🙂 won comfortably in straight sets! Thanks for the support!! M http://t.co/JCuvpHWAPL

The final of the men’s doubles was an all-Indonesian affair as Selvanus Geh and Kevin Sanjaya Sukamulyu met their compatriots Ronald Alexander and Eddie Subaktiar. Geh and Sukamulyu achieved a solid 21-9, 21-13 victory and took home the gold medal.

"I am very happy with the tournament itself. Our Bulgarian athletes performed well. But health problems prevented us from more success. We are working hard to achieve better results in the future and this makes me happy," said the President of the Bulgarian Badminton Federation, Prof. Dr. Puzant Kassabian.

Click here for full results of the 2014 Babolat Bulgarian International.

Kateřina Tomalová: I had something to focus on