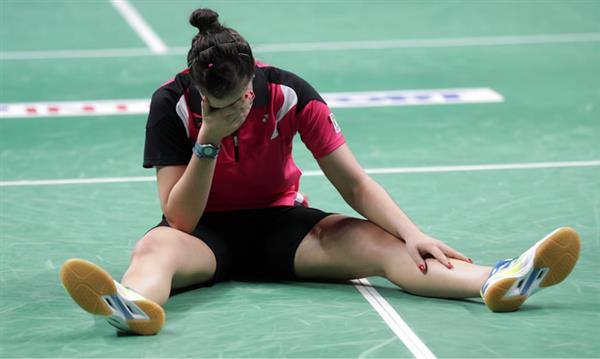 It has been a whirlwind month for Spain’s first ever European badminton champion Carolina Marin (pictured). After claiming her historic gold in Kazan last month Europe’s number 1 has enjoyed all the associated trappings of success and returns to competition this week at her home International. In a year that saw Marin break into the world’s top 10, adding the Spanish International to her European gold is sure to be top priority this week as she attempts to make 2014 a year she will never forget.

While home court is a distinct advantage for Marin heading into the tournament this week there are sure to be an endless supply of unwanted distractions that the world number 10 could do without as she attempts to lift the title she last won in 2011.

While many of Europe’s elite are taking part in the Thomas & Uber Cups in India, the women’s singles field is as strong as it has been on the European circuit this week and Marin will need to find her "A" game as early as round one with a tricky tie against Russia’s Victoria Slobodjanuk.

Lurking in wait in the later rounds will be 2013 European Junior Champion Stefani Stoeva of Bulgaria and Ireland’s Chloe Magee will look to build on her good performance from Greece last week. The bottom half of the draw is where the main threat to Marin’s title charge lie. Team mate Corrales will look to put back to back titles together and Scotland’s Kirsty Gilmour, who has been training in Spain for the past week, will have designs set on lifting the title as she builds towards the Commonwealth Games.

Marin is not the only European medallist to make the trip to Madrid this week. Mixed doubles European bronze medallist De Reiter and Barning head up a stellar field while Imogen Bankier will partner Robert Blair as top seeds in the mixed doubles.

Bankier teams up with Kirsty Gilmour in the women’s doubles after ending her European women’s doubles bronze medal partnership with Petya Nedelcheva. The Bulgarian veteran now moves forward alongside team mate Linda Zetchiri in doubles and will be a formidable pairing in Madrid this week.

Adam Cwalina & Przemyslaw Wacha travel to Madrid as defending champions and will look to add their ninth title to their resume since lifting the Spanish International in 2013. As top seeds the Poles are the quality partnership on show this week and the rest are sure to be squabbling over scraps as the world number 20 pair look to cap off an amazing twelve months.

Pablo Abian is top seed in the men’s singles and will be out to prove a point on home soil. While history suggests that the Spanish number one will be one of the favourites to lift the title a record of 4 semi-final defeats and runners up spot in 2012 is sure to play on his mind.

Abian will also have to come through a tough draw with recent winner Flemming Quach waiting in round two and Rasmus Fladberg a likely opponent in the quarter final. Add into the equation Italy’s Indra Bagus Ade Chandra and Malaysia’s Zulkiffli and the enormity of Abian’s challenge becomes apparent.

All the action in Spain kicks off today Thursday with qualification round with all scores and draws available by clicking HERE.

See all previous champions of the Spanish Open since 2001.