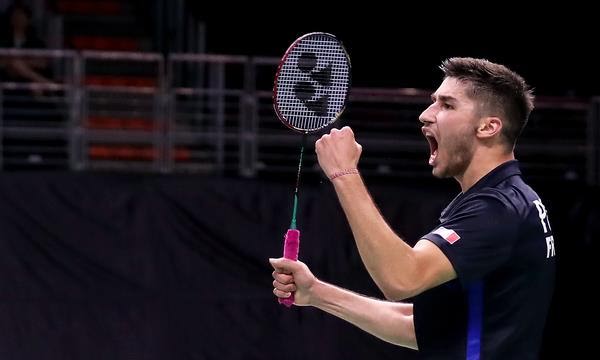 Title wins in the men’s singles and doubles saw a largely positive day for France’s rising stars on finals day at the YONEX Latvia International in Jelgava.

It began with Fabien Delrue and William Villeger, who continue their strong form on the Future Series with a strong and solid 21-12, 21-17 win against two of Denmark’s newest faces Emil Lauritzen and Mads Muurholm.

Shortly afterwards, Toma Junior Popov collected the singles crown after taking down fellow Frenchman Leo Rossi 21-10, 21-15. With this title adding to Popov’s win in Greece earlier in the year, this makes a real threat to breakthrough into Europe’s elite in the next few years.

See also: Thomas and Uber Cup — France off to a flying start on day one

It was not quite a hat-trick of wins for France, as women’s doubles pair Ainoa Desmons and Juliette Moinard fell 21-17, 21-16 to Estonian top seeds Kristin Kuuba and Helina Ruutel. After what has been a memorable for Desmons and Moinard, the superior quality and experience of Kuuba and Ruutel was too much in the end and the Estonian pair secured a well-deserved straight sets victory.

The first match of the day saw the women’s singles final take place. It saw Kuuba claim the first of her two titles in today’s session,as she took care of Belarussian Alesia Zaitsava 21-10, 21-16.

See also: Kristin Kuuba: The crowd will give me extra motivation

Ending the day’s proceedings was the mixed doubles. Taking the plaudits was Poland’s number one pair and tournament top seeds Pawel Smilowski and Magdalena Swierczynska. They were involved in a tight battle against Denmark’s Emil Lauritzen and Iben Bergstein. But despite a heavy amount of pressure coming from their Danish opponents, Smilowski and Swierczynska prevailed 21-17, 25-23.