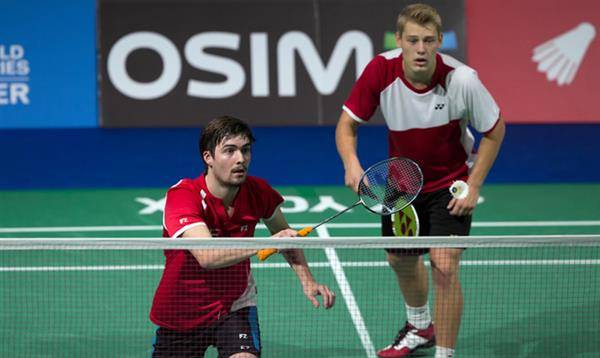 The Wilson Hellas International concluded in Sidirokastro this morning after four days of intense competition with Danish young guns making it a bumper fortnight for the European powerhouse while their more established stars battle it out in India at the Thomas and Uber Cup Finals.

Danish men’s singles in particular looks to be in good shape long term after Flemming Quach’s victory in Slovenia last week and Kim Bruun making it back to back title for Denmark beating Poland’s Michal Rogalski in the final in Greece exactly 7 days later.

The young Dane had been in sparkling form for his club Team Skælskør Slagelse (TSS) this season and was instrumental in the Danish champions successfully retaining their title only a few short weeks ago. Bruun, known for his calm persona on court, generally gets going when the going gets tough and came through a hat trick of three set matches to lift the Hellas title with a two set win over his Polish opponent.

Men’s doubles pair of Mathias Christiansen and David Daugaard (pictured) complemented Bruun’s performance by lifting the men’s doubles title to cement their credentials as a pair to watch out for in the future.

Ireland’s Sam and Chloe Magee ended a two year title drought dating back to the Turkey International in 2012. The Irish siblings went to Greece as top seeds and came through the tournament without dropping a set beating Bulgarians Kisyov and Popstoikova in a one sided final.

“It has been a bit of a lean spell in terms of titles for sure but we have been working hard in training and this win is a nice way to close out the season. I am also very satisfied with the way we handled the pressure as top seeds and winning without dropping a set makes it all the more special” said Sam Magee immediately after their victory.

It was to prove to be a bitter sweet finals day for Chloe Magee as the satisfaction of winning the mixed doubles was balanced out by defeat in the women’s singles final. The world number 32 fell at the hands of top seed Linda Zetchiri as the Bulgarian dominated in two games 21-13 21-13.

Turkey’s European women singles bronze medallist Ozge Bayrak put the disappointment of an early loss in the women’s singles competition firmly behind her as she teamed up with Neslihan Yigit to lift the women’s doubles title.

The Turkish top seeds proved to be just too strong for Russian pair Komendrovskaja and Vorobeva winning in two quick games 21-7 21-14.