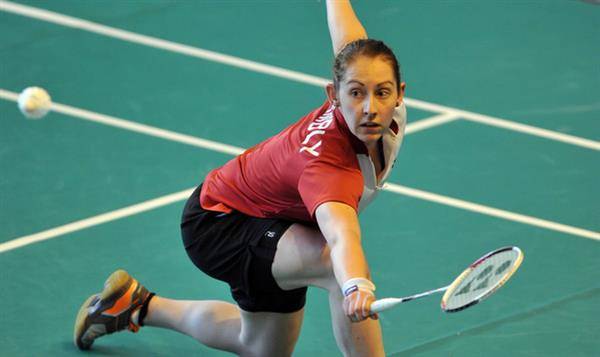 There is no doubting the obvious talent of Kirsty Gilmour. The Scott has been a prolific winner around Europe over the past two seasons and at world number 18 is Europe’s second ranked singles player behind Carolina Marin.

If badminton was music this current season would have been akin to that difficult second album for the Scot. Gilmour stormed onto the international circuit with a series of wins at the beginning of 2013 and this year she added the Czech International and Swedish Masters to her resume which has been an impressive feat in itself. In sport you can only beat the players put in front of you but the facts are there for all to see, victories this season came at tournaments that Marin was not competing in.

Just as there have been impressive wins for Gilmour there have been a handful of disappointing final defeats for the Scott and most of which have been at the hands of Marin. Early season defeats at the London GPG and her home Scottish GP were difficult to take so it does not take a rocket scientist to work out that a victory over Marin would be a monkey off her back and a statistic that Gilmour could finally put to bed.

That landmark victory over the European champion finally came in Sunday’s final of the Spanish International and with it recognition that Gilmour’s difficult second album season has received the critical acclaim it so richly deserves.

“Going into the final I had nothing to lose so I tried to really stick to my plan” said Gilmour “The whole way through was quite tight points-wise but I managed to sneak ahead at some of the bigger points more importantly hold my nerve.

It was a pretty good week all-round for Gilmour as she builds towards the Commonwealth Games adding a silver medal to her singles gold alongside Imogen Bankier in the doubles. The Scots losing out to Europe’s most prolific and consistent performers this season the Stoeva Sisters from Bulgaria.
“All in all it was a pretty good week as we got some good experience on the doubles court as we head towards the Commonwealth Games. So very happy but also very tired”.

Second seed Poles Lukas Moren and Wojciech Szkudlarczyk upset the season trend as they took down compatriots and top seeds Adam Cwalina and Przemyslaw Wacha in the men’s doubles final. It’s the second title of the season for the number two Polish pair after victory in Bulgaria early in the season which interestingly was over Cwalina & Wacha proving doubles is alive and well in Poland.

Meanwhile Denmark’s Joachim Persson rolled back the years and sent a signal to all back in Denmark that there is still some fight left in the old dog by lifting the men’s singles title with a victory over fellow Dane Rasmus Fladberg.

Imogen Bankier partnered Robert Blair to their seventh title of the season in the mixed doubles final. In what was the longest match of the day The Scots came through in three games against Mateusiak and Wojtkowska of Poland.
For all results from Spain click HERE