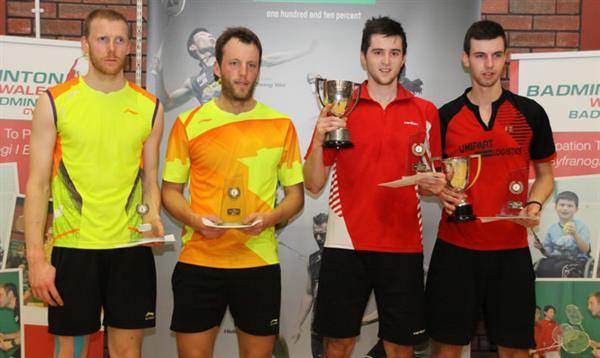 Day 4 of the Yonex Welsh International Badminton Championships means only one thing — semi-finals and finals day and what a treat they turned out to be!

Kicking off the semi-finals was the mixed doubles between Anders Skaarup Rasmussen and Lena Grebak (DEN) and Vitalij Durkin and Nina Vislova (RUS) with the latter booking their place in the final winning the semi 21-16, 21-14. In the other mixed semi-final No1 seeds Chris Langridge and Heather Olver (ENG) kept up their winning form beating Ben Stawski and Alexandra Langley 21-12, 21-17.

Missed out on what happened at #YonexWINT? Don’t worry, read the daily reports on http://t.co/Ewiak91bH6

He Tian Tang and Renuga Veeran (AUS) claimed their finals place beating Scotland’s Imogen Bankier and Kirsty Gilmour in two sets 21-17, 21-14. In the longest match of the semi-finals at I hour and 6 minutes, Keshya Nurvita Hanadia and Devi Tika Permatasari  (INA) beat Russian duo Anastasia Chervaykova and Nina Vislova in a close 3 setter 21-18, 16-21, 21-15.

In the women’s doubles He Tian Tang and Renuga Veeran (AUS) proved too strong for Keshya Nurvita Hanadia and Devi Tika Permatasari  (INA) winning the final in 2 sets 21-15 21-12.

Last but not least was the men’s doubles final. Christopher Coles and Matthew Nottingham managed to go one place further at this year’s event claiming the title after a well fought encounter beating Robin Middleton and Ross Smith (AUS) 21-17, 21-15.

The Yonex Welsh International has been an exciting tournament and Badminton Wales would like to thank all the players, officials and volunteers for helping to make the Championships such an excellent event.
See you next year…

Click here for all results from the Yonex Welsh International.
Check out our Facebook page for a photo gallery from Cardiff.

Article and photo by Laura Cairns.