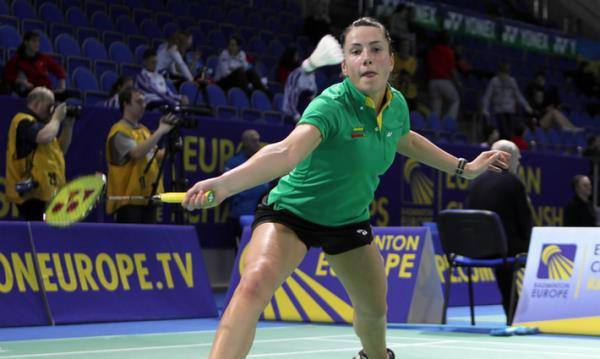 After a two year break, Lithuania organized the Badminton Europe Circuit tournament Yonex Lithuanian International in Kaunas. The Future Series event took place in old, but very cosy Sports Hall that was built in 1939. It holds up to 5000 people. 115 players from 22 countries came to this tournament to test their badminton abilities.

Before the tournament, the Lithuanian and Irish national teams had a friendly match. The both teams were not of their best composition. The Lithuanian team was lacking their top player Kęstutis Navickas who is currently healing from severe trauma. The Irish team did not bring their star players as well. Despite everything, Lithuanian team won 5:0.

There have been no big surprises in this tournament. All the stars of the tournament have reached the quarter-finals. One of the best matches of the tournament was the game between top seed Raul Must of Estonia and Kian Andersen from Denmark. After 70 minute fight the more experienced Must took an upper hand and won the game 24/26, 21/19, 21/14.

Raul Must reached the final where he lost to Adrian Dziolka of Poland in two games. The doubles categories were all dominated by players from Russia. The men’s doubles and mixed doubles finals was an all-Russian affair.

The local hosts were proud of their star player Akvilė Stapušautytė who was in Olympics for two consecutive times and showed a great form on home soil. In the women’s singles final she beat former Danish European Junior Champion Anne Hald in two games to secure her first title at the Lithuanian International.

Click here for full results of the tournament
Click here to see all previous champions of the Lithuanian International.