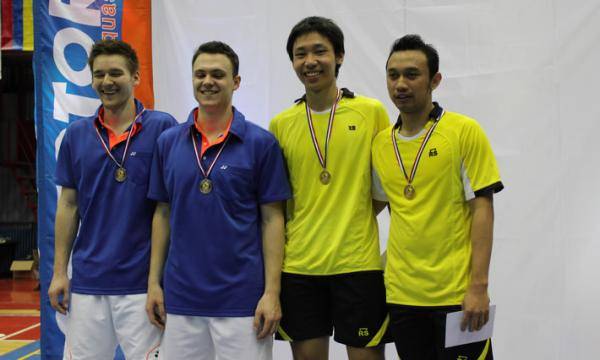 The finals of the 2013 Croatian International (5.000 Dollars) started with the mixed doubles final between two Danish pairs and after three games, Niclas Nøhr and Rikke S. Hansen took the victory. In the women’s singles final, the top seed Natalia Perminova of Russia celebrated her victory with a 21:14, 21:15 win over Sandra-Maria Jensen of Denmark. Although the result maybe doesn’t show it, the match was very intensive for both players. Irina Khlebko and Ksenia Polikarpova took the victory in the women’s doubles due to a 21:19, 21:19 win over Denmark’s Julie Finne-Ipsen/Rikke S. Hansen.

The men’s singles final gave the audience some spectacular scenes. Wisnu Haryu Putro of Italy and Mathias Borg from Sweden fought a hard battle. Throughout all three games, the match could go either way, and none of the players had an advantage over the other. And the audience appreciated it, giving each and every point a loud cheering. In the end it was the Italian Putro, who could celebrate after winning 25:23 in the third game.

Kind of disappointment for the locals in the final match of the day, played by the Croatians Durkinjak/Hoelbling (pictured) vs. Rusdianto/Wardhana of Indonesia. The men’s doubles title went to the Asians. However, the spectators were enjoying the match all the way, cheering and hoping for a win of their players. With the result of 21:14, 22:20, Durkinjak/Hoelbling gave their best and got a big applause at the prize giving ceremony after receiving the well deserved silver medals.

Article and photo by Denis Uhoda.