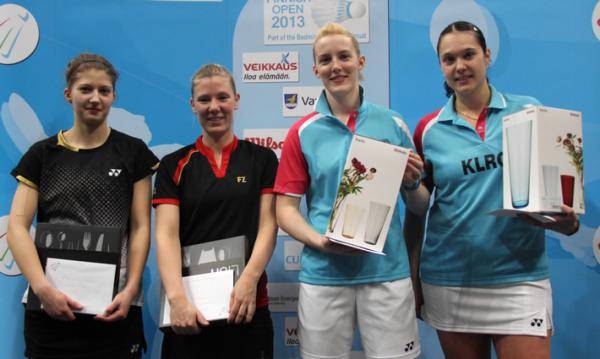 The new pan European women’s doubles partnership of Petya Nedelcheva & Imogen Bankier (pictured) arrived in Helsinki this week with one clear objective and that was to win gold in their quest for points to qualify for the summers BWF World Championships in China.

Today, Bankier & Nedelcheva proved that they were the cream of the women’s doubles crop in their two set win over Denmark’s Lena Grebak and Maria Helsbøl and secured the 4000 points on offer which serves to set the pair on their way to qualifying for Guangzhou in August.

It was clear from the outset of the match that Nedelcheva & Bankier had the game to take down the Danes as the Bulgarian controlled the exchanges from the rear court with her vicious right arm and Bankier tidied up all the leftovers at the net.

The pair were never headed in the opening game and ran out 21-10 winners. “We got off to a good start winning the opening game so easy and it gave us the confidence in our tactic and our play moving into the second game” commented Nedelcheva.

The second game followed very much the same pattern as the first with Nedelcheva and Bankier sprinting into a 3-0 lead. The Danes to their credit fought hard but found it difficult to deal with the ferocity of the Bulgarians smash. Ten points in a row saw Nedelcheva and Bankier hit the cruise button as they led 17-10 which was a risky strategy against quality Danish opposition.

Helsbøl and Grebak fought back with a run of 6 points and sensing the danger Nedelcheva had a quite word with her partner which served to ignite the Scots burners again and they powered home to a 21-14 victory. “I fell asleep as I tend to do when I get a lead in a match” explained Bankier “Petya had to get me going again and once we found our rhythm we took the match easy enough in the end”

“World Championship qualification is our aim and this is a good start. Next we will go to Dutch Open where I will also play singles as I need to maintain my ranking in that event also” commented Nedelcheva.

Losing a final is tough but Lena Grebak also had reason to celebrate as she picked up the mixed doubles title in Helskini alongside rejuvenated partner Anders Skaarup. Skaarup literally stepped off the plane from Dubai after a week’s holiday and flew to Helsinki with little or no practise.

Ouseph goes back to back

England’s Rajiv Ouseph achieved a rarity in circuit tournaments by going back to back as he claimed the Finnish Open title this afternoon to match the French International title he won in Orleans last week. In today’s final Ouseph came up against an injury hampered Dmytro Zavadsky of the Ukraine as a calf strain he picked up in the quarter final continued to hamper his mobility especially on the backhand side.

Ouseph himself looked a bit sluggish all week but it is a real measure of his class that he managed to come through a tough series of matches to not only go back to back but also retain his title from 2012. “I have been tired this week but it was important for me to come back to challenge level to get some continuity of matches and get that winning feeling again which I have done this last two weeks.”

The Vantaa Energia Arena has had many happy memories for Spain’s Carolina Marin and today, on the court where she lifted her European Junior crown two years ago, she defeated compatriot, roommate and close friend Beatriz Corrales just as she did on that famous day in 2011. The difference this time was the Corrales got know where near Marin as the new superstar of European women’s singles badminton swept her friend aside in just a half hours play.

“This hall and this court has brought me many happy memories. Today is another memory created and a win I am very proud of. It has been a tough but fun month for me but I am really enjoying my tournaments much more and I feel very relaxed and in control”

In the final match of the day Malaysian 2011 world junior men’s doubles champions Heg & Teo defeated fellow Malaysian pairing of Abul Khalid and Tan to claim yet another title on European soil.

BETV’s next live HD tournament YouTube coverage will come from the Denmark International starting 1st May.

Article and Image by Mark Phelan (Live in Helsinki)